A deal to send Giants midfielder Tim Taranto to Richmond has been agreed in principle and is poised to be one of the first trades done when the trade period opens on Monday.

A source with knowledge of the discussions said the Giants and Richmond met in Sydney on Friday and agreed a deal after the out-of-contract Taranto had requested a trade to the Tigers. 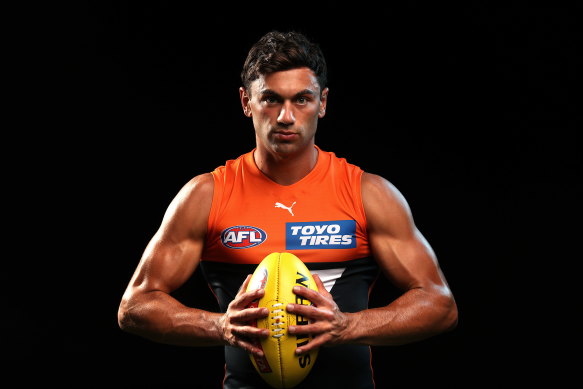 Central to the deal will be Richmond parting with picks 12 and 19 in the exchange, which could include the movement of other later picks.

Richmond and the Giants agreed to separate the two deals for Taranto and Jacob Hopper, who has also requested a trade to Richmond. As Taranto is out of contract and Hopper contracted, it was considered easier and cleaner to separate the deals.

The likely sum of the deals to move both players to the Tigers will be that Richmond give up 12, 19 and 30 in this year’s draft and their first-round pick next year, which is popularly considered to be a stronger draft than this year. There will probably be some movement of other, later picks involved in the final deals and potentially a Richmond player moving to the Giants.

GWS have long been interested in another ruckman and have inquired about Ivan Soldo, among other players. 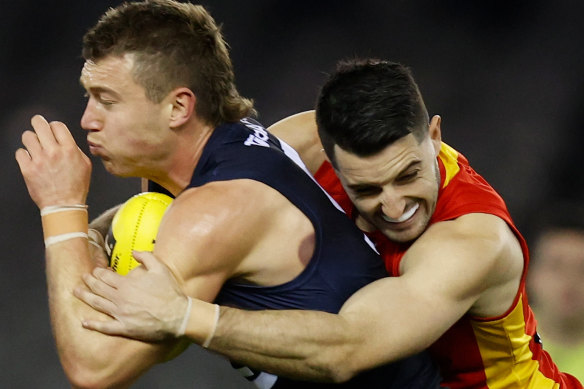 Brayden Fiorini, here tackling Patrick Cripps, is a chance to be traded to Collingwood. Credit:Getty

In other likely early movement, Giants small forward Bobby Hill will move to Collingwood in a trade of their future second-round pick, with another pick coming back to Collingwood this year.

The Magpies appear likely to secure Brayden Fiorini from Gold Coast for basically nothing in draft terms as the Suns try to get Fiorini’s $600,000 contract for next year off their books. Collingwood will spread that contract out across a multi-year deal for the wingman, who was pick 20 in the 2015 draft.

The Lions will offer the Bulldogs their future first-round pick to try to secure Josh Dunkley. Gold Coast will discuss a trade with St Kilda for Ben Long as well as tying to secure a deal with Brisbane for forward Tom Berry to move to the Suns for a third- or fourth-round pick. 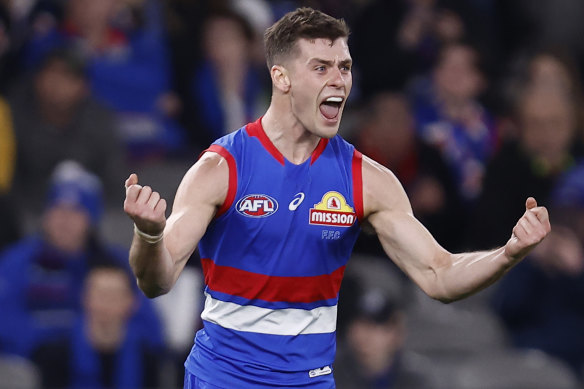 The Bulldogs’ Josh Dunkley has requested a trade to Brisbane.Credit:Getty Images

Hawthorn, Geelong, Essendon and North Melbourne are all trying to lure Gold Coast’s Jack Bowes and get in on the salary dump from the Suns, who are prepared to offer pick seven in the draft with Bowes as an incentive for a club to take over the player’s full contract, according to a source with knowledge of the situation. Bowes’ heavily back-ended contract has him tied to the Suns for two more years on about $800,000 a year.

The former academy product, who was taken at pick 10 in the 2016 draft, would also have his money spread across multiple years elsewhere. Clubs would effectively be able to buy pick seven by agreeing to take on the full contract, as well as getting a talented player who has struggled for opportunities in the Suns midfield.

Toby Bedford has told Melbourne he wants to be traded to GWS for more playing opportunities.

The Demons have already begun negotiations with Fremantle over Luke Jackson but are waiting to see what picks Fremantle secures from the players poised to leave the Dockers in other deals before finalising any trade. Blake Acres, Griffin Logue and Rory Lobb have all asked for trades away from Fremantle. Acres wants to move to Carlton, Logue to North and Lobb to the Bulldogs.

Gold Coast and Adelaide will meet over a deal for Izaak Rankine, which is likely to centre on Adelaide’s first-round pick – currently five – and some other later picks.

Melbourne and Collingwood will wait until the Jackson deal is done before negotiating a trade for Brodie Grundy to the Demons.