GWS Giants star Tarni Evans is facing multiple weeks on the sidelines after a dangerous tackle that caused Adelaide player Ailish Considine to be taken off the field in the third quarter with a suspected concussion.

Considine is likely to be removed from the game for a number of days due to the AFL’s new strict concussion protocols. A player who suffers a concussion will need to sit out the game for at least 12 days after an injury before they can take the field again. 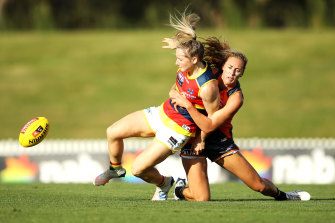 “There was no issue at all there,” Clarke said post-match if he had spoken to her ahead of the game about the incident.

“She is a great player, she works extremely hard … she is getting some reward which is nice, we are pleased with her.”

The match was played behind closed doors despite the SCG hosting 28,000 fans in the BBL final on Saturday night, after a hectic week that saw both teams forced into quarantine in the lead-up to the match but given exemptions on specific days to train.

The Crows and GWS both flew to Adelaide just half an hour before WA announced their lockdown before flying to NSW for Sunday night’s game.

The AFLW is yet to confirm next week’s fixtures due to the changing border policies, however, GWS head coach Alan McConnell refused to blame GWS’ back-to-back losses on the COVID-19 chaos.

“I don’t want to make excuses, there no place in the game for whingers,” he said.