One of the firms inadvertently caught up in Parramatta’s salary cap scandal has commenced legal action against the club after going into liquidation.

Blackcitrus has started Supreme Court proceedings against the Eels over digital services provided to the club. The business, which counted the Eels as its biggest client, has gone bust and a liquidator has been appointed by the court to recoup outstanding monies for creditors. Sources with knowledge of the situation suggest a six-figure payment is being sought.

Revelations that the matter is scheduled for a directions hearing on September 8 come during one of the most testing periods in the club’s history, a four-game losing streak that has heaped significant pressure on coach Brad Arthur.

A subsidiary of Blackcitrus, Score Cube, was responsible for third-party player payments that were not properly disclosed to the NRL. In 2016, the Herald broke the news that payments from Score Cube to former forward Anthony Watmough had raised suspicions at Rugby League Central.

The revelation proved to be the tip of the iceberg in systemic rorting of the salary cap by the Eels that ultimately resulted in the deregistration of five officials, the stripping of a dozen competition points, a $750,000 fine and a police probe.

The NRL’s case files showed several Parramatta officials ignored warnings to come forward and properly disclose the relationships between the parties. There is no suggestion of any wrongdoing by Watmough or personnel from Blackcitrus or Score Cube. 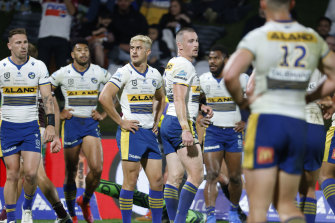 The Eels have an off-field distraction to go with their poor run of form.Credit:Getty

Parramatta had seemingly moved on from the whole sorry saga, one of the darkest periods in the club’s history. However, the Supreme Court action raises the prospect of further fallout just as the Eels are under pressure to arrest another late-season slump.

Meanwhile, Eels halfback Mitchell Moses said the team was eager to put Saturday’s 56-10 loss to Manly behind them heading into this weekend’s match against the Cowboys.

“You’ve got to put those things past you,” he said. “We played a majority of the game with 11 men and didn’t get much of the ball.

“The outside noise isn’t really affecting us; we know what we are doing wrong in our games. We’ve just got to get ourselves out of this little form slump that we are in at the moment and hopefully we can do that this week.”

Moses said the team was more feeling the weight of speculation about the tenure of coach Brad Arthur at the club.

“He’s not the one going out there and making the tackles. That’s completely on us,” Moses said.

“He’s given us good game plans to go out there and perform, but we aren’t doing that at the moment for him. We’ve got to take ownership of that.”

Sports news, results and expert commentary. Sign up for our Sport newsletter