Cries of “Gee-long” were heard reverberating across the Geelong waterfront as 25,000 footy fans came out in force for the Cats 2022 premiership parade.

Even the rain was kind enough to avoid the city as fans lined the streets decked out in navy-and-white scarves, guernseys and flags to see the AFL’s champion team in the flesh. 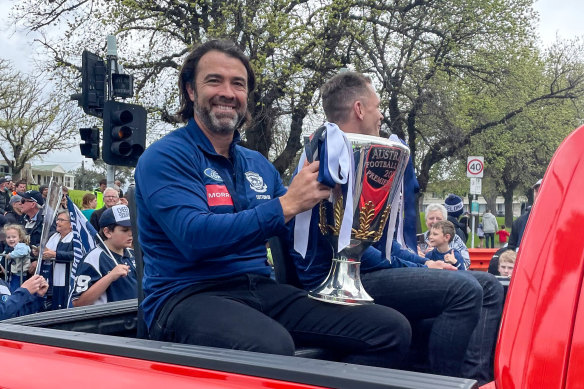 Tuesday’s event was a family-friendly affair for Geelong, which had been dubbed Dad’s Army by some unkind pundits because it’s playing list was among the oldest in AFL history.

On Tuesday, that maturity was on show as many Cats players took their children with them in the parade to mark the club’s first premiership in 11 years.

Norm Smith Medal winner Isaac Smith, holding daughter Isla, joked that as an older, wiser premiership-winner he had managed to get some sleep during the ongoing celebration since Saturday’s thumping 81-point grand final win over the Sydney Swans.

He said the parade, which followed a family day at Kardinia Park on Sunday and Mad Monday celebrations with Geelong’s inner-sanctum on Monday – was a chance for the club to thank its fans and the Geelong community.

Player of the finals Patrick Dangerfield said it was special to celebrate with locals fans who hadn’t been able to get to the MCG on Saturday.

As for some of the criticism of their elderly costume stunt on Mad Monday, he wasn’t fazed.

“You can’t do anything right these days without upsetting people,” Dangerfield said. “To be honest with you, I don’t care too much.” 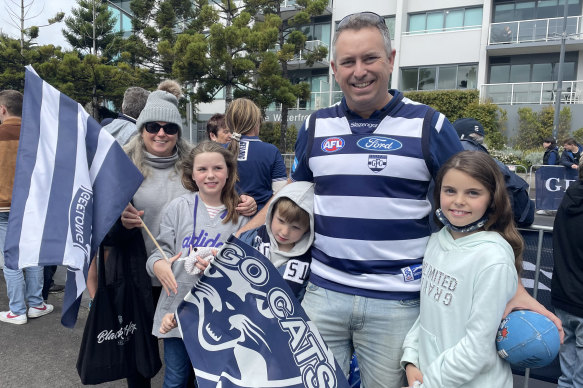 It was a special day for young Cats fans who were celebrating their first Geelong premiership.

Matt Macfarlane said he had convinced his three children to follow his team, rather than Carlton, who his wife Kylie supports.

“Well, if you look at the last few years, Geelong has been doing really well, so it was pretty easy,” he said.

Macfarlane said he and his 10-year-old twin daughters, Grace and Maddie, and seven-year-old Jackson were “very excited” to be at Tuesday’s parade. 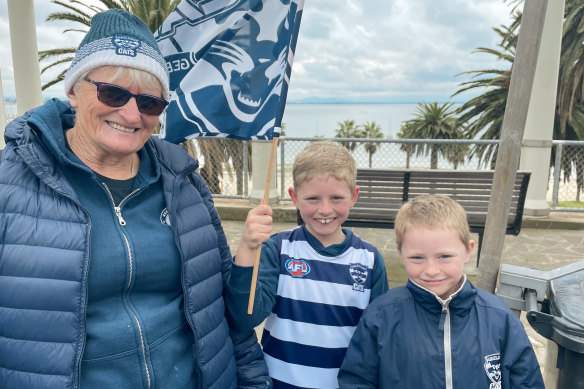 Harry, 8, and Tommy, 7, attended with their nanny Pam Morrow, who, after a lifetime supporting the Cats, was delighted to be celebrating another premiership with a new generation of supporters.

For coach Chris Scott, captain Joel Selwood and teammates Tom Hawkins and Mitch Duncan the parade must have revived memories of the cub’s last premiership in 2011, which they were all a part of.

However, the city has changed dramatically in those intervening years.

Despite losing hundreds of manufacturing jobs, particularly at Alcoa and Ford, Geelong’s civic leaders talk about the city having newfound swagger, pointing to the city’s recent population boom.

The National Disability Insurance Agency, Transport Accident Commission and WorkSafe Victoria all now have their headquarters in Geelong, and pubs, bars and restaurants are flourishing in the CBD.

Geelong mayor Peter Murrihy said the premiership would further boost the city’s spirit and economy, after the pain of extended lockdowns.

“It’s been incredible,” he said. “It really lifts the mood in the community. It’s brought people together.”

In 2011, the exposure of the Cats’ premiership was substantial. Figures supplied by the council showed the grand final parade that year generated $4.8 million worth of media coverage.

Keep up to date with all the AFL trade action this week with our daily newsletter. Sign up here.