Dreamtime was in the west, but the name wasn’t important. The event was important and the game was important. It was one of the most instructive games of football in years. 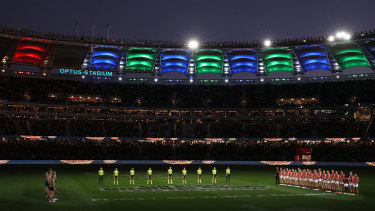 The incredible scene set at Optus Stadium for the Dreamtime blockbuster between Richmond and Essendon.Credit:Getty Images

Had you said the biggest crowd of the season at Optus Stadium of more than 55,000 people would be for two non-WA sides, well, more people than Darryl Kerrigan would reply: “Tell ’em they’re dreamin’.”

And they were. Part of the reason it was big is because it was Dreamtime. The crowd was big because it was an event bigger than the game itself, and one that has gained a solid foothold in the imagination of the football-following public. It was the event, not just the contest, that drew people to the game.

From Michael Long’s ‘Long Walk’, to the artistic jumpers, to the respectful pre-game dance and light entertainment, the Dreamtime games resonate with people. They resonate in large part because the public can see the games capture the imagination of the players involved. It is clear to see and hear the depth of feeling the Indigenous players have for the game, and more broadly for Sir Doug Nicholls round. The fact it means something to the players makes it mean more to the fans.

The fact the crowd of this size came out loud and proud in Perth for this round was also significant, when the volume of the not-so-long-ago shameful booing of Adam Goodes is remembered. This was a world away from that ugliness. 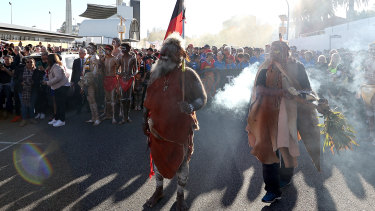 Indigenous elders prepare to start the ‘Long Walk’ from the WACA to Optus Stadium.Credit:Getty Images

But the noise for Essendon as they surged from five goals down to hit the lead in the last quarter suggested these were not agnostics drawn to a sporting contest. They were genuinely passionate and loud club fans.

What does that tell us? It tells us that when one of the WA teams plays in Perth the home members retain the majority of seats and the allocation for the away team is not representative of the demand, or that team’s following. That’s OK, home team fans deserve an advantage.

Last year Collingwood and Geelong played a game there but the attendance was not as big. There was a COVID restriction at the time on crowd size so it is difficult to compare, but plainly the fact Saturday night was an event, not just a game, also brought the fans out.

This was also Perth making a statement about a national competition. It is a city of two teams, but it is not a two-team town.

Does this now mean the AFL looks at rotating the location of blockbusters like a Super Bowl, with big games hosted by cities without a team involved? Probably not, but it shows it could work in Perth.

You could host Anzac Day in Perth between Collingwood and Essendon and, likewise, fill the stadium and service those equally deserving non-Victorian members of both teams. You could probably do the same on Easter Monday, though Hawthorn’s lowly standing at the moment might make that difficult.

You could do it for the opening round of the season and for the Queen’s Birthday clash.

But would you want to? This brings the discussion back to one that has dogged the AFL in recent years. The league has been more interested in growing new markets than servicing traditional ones (hello Tasmania), and here we have an under-serviced traditional market that is also a growth market.

Growing before our eyes

This was not a breakout game for Shai Bolton any more than last week’s was, or the ones early in the season. They were all breakout games.

Shai Bolton is growing weekly from good second-string midfielder to an elite midfielder in the space of a season. 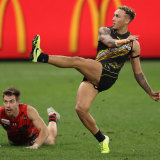 He is one of the rarest of midfielders. He is both an inside and outside player. He is a goalkicker, and yet he is built unlike any of the other players who have this rare combination of gifts.

The other top-end multi-tasking footballers are freakishly put together: Dustin Martin, Nat Fyfe, Christian Petracca, ‘Danger’ and ‘The Bont’. They are all tall, strong, solid, powerful and fast. They are elite talents but also have a physical edge over other players.

Bolton is not tall – just 175 centimetres. He is not solid – he weighs barely more than a schoolboy at 77 kilograms. He is strong, but not powerful.

His game is not reliant on any of those typical physical traits. He doesn’t have that type of Alpha exceptionalism.

He is fast. And he does have a leap. It means he is a good overhead mark for his height (until Jack Riewoldt ignored common sense and jumped into traffic, Bolton was clearly the leader for mark of the year), and he has leg speed that only Dangerfield of the aforementioned group could beat.

Like every one of this group of elite midfielders, he has the singular inability to be tackled. He doesn’t fend off like Dusty. He doesn’t slow time like Bontempelli. He doesn’t stand up in tackles like Petracca and Fyfe. The closest equivalent is Dangerfield, who also has tacklers melt off him as he accelerates.

To be clear, I am not saying he is in this bracket of midfielders yet, for he has not done it often enough for long enough at the elite level. But he is trending that way. He may not reach that level but he does have rare attributes and, at the moment, we are seeing him improve weekly.

Critically, he also seizes the occasion in big moments. His goals in the last quarter all had an element of chance that simultaneously also had nothing to do with luck. He was in positions where the ball fell fortunately for him, but he then had the pace, vision and lightness on his feet to capitalise on that good fortune.

Forward of the ball he looks like a natural, intuitive forward. In the middle he looks a natural midfielder.

The hands in the back rule was rightly dropped because it punished a player for merely holding his ground, but that relaxation has now swung too far. Too many players are being illegally pushed out of marking contests or tunnelled under the euphemism of “working him under the ball”. Using your forearm or backside to push a player in the back is still pushing a player in the back.

A final, small point that’s more important than any of the above: buy a blue MND beanie in the build-up to the Queen’s Birthday clash and support the fight against the awful motor neurone disease. 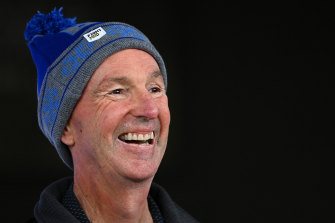