If footy cards still came with a stick of chewing gum, a dusting of white sugary powder, and great exaggerated poses from players scooping up a ball one-handed or baulking a non-existent opponent, then Mark Blicavs’ card would be appended with the position ‘utility’.

Utility was the seemingly ubiquitous position that was given to players who didn’t have a position. No one quite knew where they played, for they played everywhere and nowhere. Blicavs is a utility. 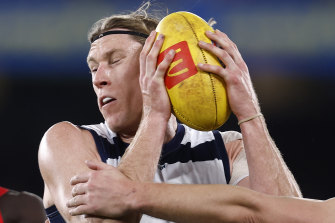 Or, as Chris Scott figures him, he’s a midfielder who can also play everywhere: Key back, ruck, tagger, wingman.

Scott figures it’s why he can have won two best and fairests but has never made All Australian, for the judges can’t decide where to place him (as if that is a problem, each year they randomly throw a midfielder into positions they have never played as forward or back pockets just to get them in). But his point is well-made.

As Scott said on Saturday night: “Blicavs is a midfielder who can play back. Anyone that thinks otherwise hasn’t been watching us.”

On Saturday night he tagged Patrick Cripps as well as playing second ruck. Last week when the Cats defeated Melbourne, he spent 40 per cent of the time in the ruck and when he wasn’t rucking he was running with Christian Petracca or Clayton Oliver.

Few clubs have a player of his size and athleticism able to do that. Of the top four teams he might be the most underrated important structural player.

Consider that his second ruck opponent last week, the very highly rated Luke Jackson has had more than 100 fewer hit-outs this year than Blicavs. While Jackson has played 14 games this season which is three fewer than Blicavs, the Cats utility has averaged 15 hit-outs a game this year to Jackson’s10. The Demons player has kicked eight goals, Blicavs five.

“He’s just a really important player for us,” Scott said after the Demons win. “It’s often misused in AFL, but he’s unique. There’s no one else like him.”

He is also emblematic of Geelong this year. While he has been a good player for a long time what he represents is how Geelong are drawing something from players in roles. Tom Atkins’ game last week was terrific on the ball. He had a run-with role with Sam Walsh on Saturday night and while Walsh was one of the Blues’ best players, Atkins’ pressure around the contests was still significant.

Geelong have been getting an impact out of these role players Atkins, Brad Close, Max Holmes, Mark O’Connor and even Gryan Miers, all of whom have pace and are used for the higher pressure game Geelong have been playing.

Geelong killed Carlton on turnover, which is an area that has dramatically improved on 2022, and it is the pressure of these fast fringe types that has been significant in the change. Jeremy Cameron is both benefiting from and helping make it happen.

Football analysts will always look at these seemingly unmeasurable pressure elements in football and conclude that they are an essential ingredient in any premiership. Geelong, now top of the ladder, have got significantly better in this area.

And, of course, on top of that they have added Tyson Stengle, a player who was not regarded as more opportunist than pressure forward at Richmond and then Adelaide but he has blended that with his craftiness around goal. You didn’t really know what Geelong had been lacking until Stengle arrived and his intelligence to find space and his skill in finishing has made the Cats’ forward line look so much more rounded. 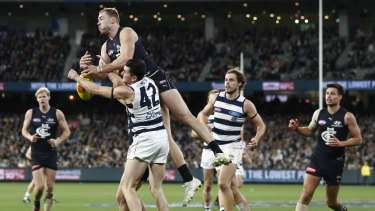 Since the bye Carlton have lost to Richmond, St Kilda and Geelong, and beaten Fremantle. In these recent tests of finals readiness in a period when they were looking to be a top-four team they have fallen short.

Oddly it is Fremantle they are most like. Both have taken huge strides this year that deserve enormous credit and do not deserve to be diminished by the idea of what they do not yet look ready to be.

Both things can be true. They can have had brilliant seasons, and yet disappointed in recent critical contests. Both underwhelmed on the weekend in matches when credibility was at stake.

Carlton will be better when Zac Williams and Jack Martin get back in and give them some of the run and outside class they are lacking. They are also still anxiously waiting, as ever, for Caleb Marchbank. With these players in they look better and maybe can yet make that flag charge, but some of their leaders will be disappointed with how they performed against the Cats.

In the battle of the four best key forwards in the game, Harry McKay was notably left wanting. Michael Voss was clearly frustrated not only in McKay but in the way the ball was delivered forward and then the ease with which Geelong’s pressure turned the ball over in Carlton’s forward line.

Richmond have forgotten how to win. Three flags for many of these Richmond players and yet twice in two weeks they have lost games that were there to be won in the closing minutes. Twice they were beaten by lower teams.

Losing to a team the week after it parted ways with its coach is not new to football, but this is a team that has just asked for a priority pick, it is apparently so bad. North were good last week against Collingwood but still Richmond, 11.22? Win the inside 50 count 67-46 and lose? 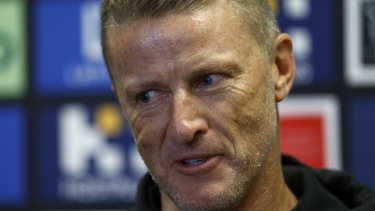 Damien Hardwick was not happy with the Tigers shooting themselves in the foot in their loss to North. Credit:Getty Images

Richmond were the side that always found ways to win when they had bad days. Now they are playing like a side that finds ways to lose.

This might sound premature, but it’s not. Nick Daicos should be in contention for All-Australian. So too Sam De Koning for that matter.

At the very least the marvellous young son of the most famous Melbourne Macedonian, and the tall athletic blond-haired brother to nine should be in the broader squad. 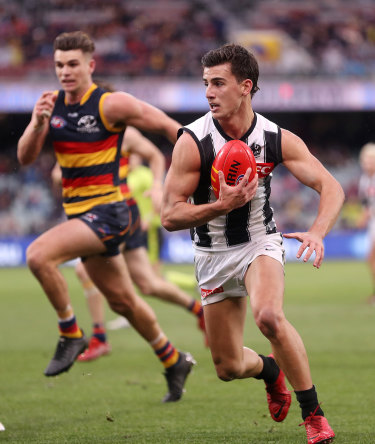 Nick Daicos should not only win the Rising Star, he should be in All-Australian contention. Credit:AFL Photos

Daicos has reached a point where there should no longer be a “good for a first-year player” rider to his performances. He is just good regardless of age. On Saturday, he had 40 touches and kicked three. That’s a hell of a game regardless of age.

De Koning is so self-assured in the air he has been crucial to Geelong’s rise to the top of the ladder. Competition is hot for places in the AA team, even the broader squad, and in particular for key defenders, with May, Weitering, Grimes, which probably puts the Cats’ backman just outside that bracket but his year should be recognised.