Ivan Cleary embraced son Nathan as he took to the stage to collect the Clive Churchill Medal on Sunday night. An emotional note to end an emotional NRL season.

Nathan Cleary was in tears as the Panthers were pummelled by Melbourne in last year’s decider.

So it was a remarkable comeback for the halfback who can now lay claim to being the best No.7 in the game.

His kicking game was perfect against the Rabbitohs, forcing several dropouts and pinning the Rabbitohs in their own end for much of the contest. The only hiccup for Cleary was the sound of his voice breaking as he let out a loud “woohoo” on stage.

“We’ve worked so hard to get here, we’ve finally done it, we’ve climbed Everest,” Cleary said. “Everyone back at Penrith, I love all you guys, we can’t wait to get back and party, baby.

“It’s a dream come true. I’ve dreamt about this moment since I was a little kid. It still doesn’t feel real. 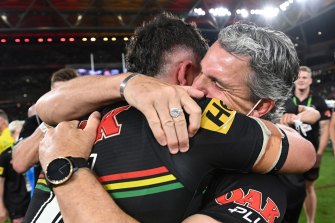 Nathan Cleary of the Panthers hugs his father and coach Ivan Cleary after winning the 2021 NRL grand final.Credit:Getty

“Any of the boys could have got this [medal], it was a big group effort, and every time you pull on the Panthers jersey it means so much more.”

After he enjoys a few well-deserved beers, Cleary will dust off the hangover in a few days and undergo shoulder surgery. He dislocated his right shoulder at the same Suncorp Stadium venue back in June during Origin II.

He has clearly been in a lot of discomfort but never wanted to let his teammates down.

Penrith were on the front foot for most of the night, which made it difficult for Souths players to apply any kick pressure.

Pressuring Cleary was a huge storyline last month when they came up against Souths in the qualifying final.

Similar to Ivan, Nathan has had no shortage of knockers in recent years. But Nathan has a premiership ring at just 23 years of age and will only get better.

His father Ivan can also rest easy he has finally clinched a title as coach.

Speaking of Nathan, Ivan said: “It’s hard to put it into words. I coach him every day, when he’s your son … to win a Clive Churchill, I couldn’t have written that story. It’s pretty cool.”

Nathan joins some exceptional names in winning man of the match in an NRL decider. Ryan Papenhuyzen won the gong last year, Jack Wighton got the nod in a losing Canberra side a year earlier, with Luke Keary, Billy Slater and Luke Lewis other previous winners.

Co-captain Isaah Yeo would have had plenty of supporters for man-of-the-match honours with another enormous effort in the middle of the field. South Sydney No.13 Cameron Murray also smashed through more than 50 tackles and worked his heart out.

The Clearys cuddling wasn’t the only emotional moment after the final whistle. Penrith winger Brian To’o also proposed to his partner in the stands. She said yes.