Holmes, 20, was subbed out of Friday night’s preliminary final against Brisbane after hobbling to the bench with a hamstring issue. He appeared despondent when he lay on the turf for treatment, but the Cats remained optimistic that the injury was not serious.

Following scans, Holmes was allowed to take to the track just two days after it appeared his premiership bid was over. 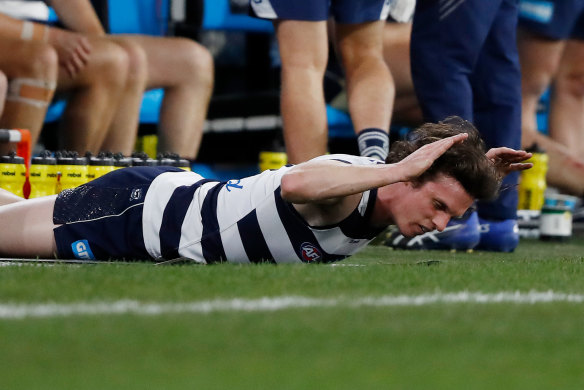 Max Holmes was a frustrated man after heading to the bench – but he could yet play in the grand final.Credit:Getty Images

“Max got moving, which is positive, and will increase his load as the week progresses,” Lloyd said.

“Clinical signs on the assessment are encouraging, which is what our medical team are more focused on. We will give him every opportunity and make a call on his availability later in the week.”

Holmes, averaging 16 disposals in his 18 games this season, told reporters outside GMHBA Stadium on Sunday that he still expected to line up against the Swans. He has experienced neuron hamstring pain before, related to his hip and back.

However, Holmes still faces a fight to prove he is fully fit, for his game is based on hard running, and dash up and down the wing. That was reinforced in the qualifying final against Collingwood when he produced the match-winning goal.

Should Holmes be ruled out, Sam Menegola and Brandan Parfitt are among those in contention to return. The Cats will hold a training session at GMHBA Stadium on Monday.

Irishman Mark O’Connor was the medical substitute on Friday night, and could now work his way into the starting 22. 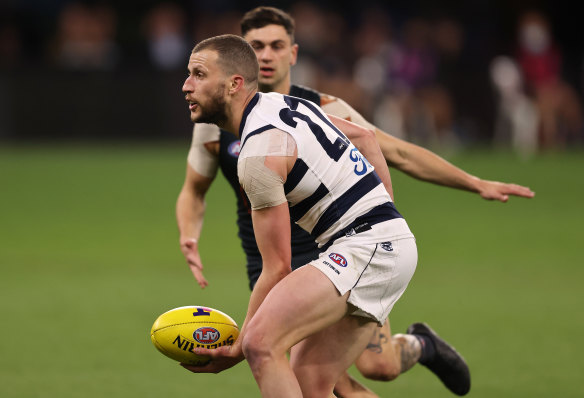 Sam Menegola will be under consideration for a recall should Max Holmes not prove his fitness.Credit:Getty Images

Defender Jake Kolodjashnij has revealed how close he came to missing the preliminary final, having been subbed out of the qualifying final with a knee injury.

“I was told I was only a 50-50 chance to get up for the game coming off that knee against Collingwood. I pretty much had the mindset coming in, whatever happens, I just want to give it my best shot, make the most of these opportunities, they don’t come around too often,” he said.

Kolodjashnij prospered in the 71-point win over the Lions, forming part of a robust back line which gave their opponents little room to move, while allowing rebounding half-back Tom Stewart to be influential.

“That’s a massive confidence booster for the boys, knowing that if we can play the game on our terms, and get everything right, that we are hard to stop,” Kolodjashnij said.

The Cats and Swans have met only once this season, when the Swans won by 30 points at the SCG in round two, a match best remembered for Lance Franklin booting his 1000th career goal.

Swans coach John Longmire, seeking his second flag as coach, said his side will be ready for what awaits.

“We play a team that’s finished the home-and-away season two games clear. It had an absolutely terrific game [on Friday night], so they’ll be very confident,” Longmire said.

“They were brilliant, they were really dominant from the first bounce, they played as the best team for the year, which they have been. We understand what they do, they’re a terrific footy team. We’ll have to play at our best but we’ll give it a go.”