Uncontracted Saint Ben Long has informed the club he will seek a trade to Gold Coast during this year’s trade period.

The 25-year-old, who has played 79 games with the Saints since making his debut in 2017, attracted interest from several clubs including the Suns and North Melbourne while he had an offer on the table from the Saints. 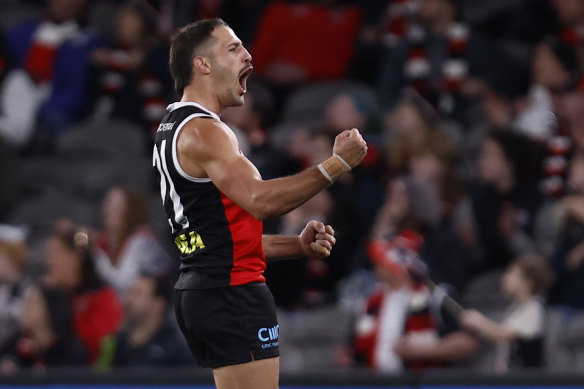 The Saints’ Ben Long will seek a trade to Gold Coast.Credit:Getty

He had one of his best seasons for the Saints, although he started as the medical sub on more than one occasion. Long topped off his season with a best-on-ground performance against Sydney in the final round of the year.

A tough utility, he could play a variety of roles for the Suns, but will add a hard edge to the line-up with his best years still ahead of him.

The nephew of Michael Long, he was pick 25 in the 2016 national draft and comes from Darwin where Gold Coast are establishing a connection through their academy.

His decision adds to what will be a busy off season for the Suns who will secure at least pick No.5 from Adelaide in exchange for the departing Izak Rankine, while contracted midfielder Jeremy Sharp is on Fremantle’s radar with West Coast also showing some interest but not confident of landing him.

Fremantle are also interested in forward Josh Corbett while Brayden Fiorini is a chance to land at the Magpies, with several clubs interested in the ball-winning midfielder. Fiorini is contracted, but the Suns are happy for him to explore his options.

The Saints are undergoing a substantial football department review.

North Melbourne have shown an interest in Hunter Clark and Brad Hill, while Paddy Ryder, Dan Hannebery and Jarryn Geary have all retired, leaving a leadership void behind Jack Steele at the Saints.