James Tedesco concedes he may have to channel his “inner Cameron Smith” to keep NSW on level footing with Queensland as they look to control the ruck and keep the Blues’ Origin campaign alive.

Tedesco and coach Brad Fittler questioned referee Ashley Klein’s officiating of ruck infringements following their surprise Origin I loss to the Maroons, prompting the NRL to release statistics this week that countered suggestions of slower play-the-ball speeds than previous series.

NSW were awarded four ruck infringement “six again” calls to Queensland’s two in game one, but lost the penalty count 4-3.

Speaking on Wednesday in his role as a Swysh ambassador and donating a $250,000 cheque to the Starlight Children’s Foundation, Tedesco made clear that NSW’s best hope of faster ruck speeds rests with themselves.

However, in a nod to Smith’s famed “ref whispering” and pointed cajoling of officials throughout his glittering career, Tedesco said he would look to communicate more with the whistle-blowers next Sunday in Perth.

“It’s something I’ve learnt; it’s a skill for sure, and I definitely didn’t think about talking to the refs before I became a captain,” Tedesco told The Herald. 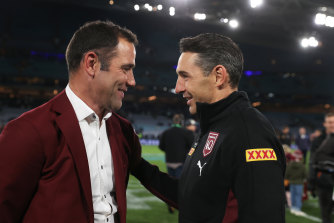 Cameron Smith, now a member of Billy Slater’s Queensland coaching staff, was a master of influencing the referees.Credit:Getty

“Everyone knows Cam Smith was so good at it; he had a knack for picking the right time and talking to the refs in the right way. It did feel like he could influence the referee.

“I think I might have to. [Klein] didn’t give a penalty for 60 minutes [in Origin I]. He was just letting the game flow, but you can’t just let them lay all over you.

“It’s not up to the ref either, though. We’ve got to create that and put pressure on the referee if we do deserve those penalties.”

In response to the focus on the ruck speed in Origin I, NRL head of football Graham Annesley highlighted that the average play-the-ball speed (3.32 seconds) was quicker than last year’s series average (3.61 seconds) and the 2022 NRL median (3.59 seconds).

Figures from the NRL’s independent analysts indicated that the Maroons did hold the Blues ruck up slightly longer than their counterparts. Queensland averaged a 3.22-second play-the-ball, while NSW averaged 3.42 seconds.

Tedesco anticipates more of the same from the Maroons after the pressure they were able to apply to the Blues playmakers and, in turn, the freedom man of the match Cameron Munster played with as his forwards got a roll on.

“We’re aware of it and they’re aware of it, too,” Tedesco said. “They’ll keep trying to slow it down because it helped them so much. It’s on us to create that [slow ruck speed] as a team.

“Queensland’s line was really pressuring us and the halves, and we were playing off those slow play-the-balls. It’s very hard to create something off the back of that.

“The feeling of the game was we just didn’t get much time and space which is what Munster and those guys had.”

Blues skipper James Tedesco played a lead role in video messaging start-up Swysh’s $250,000 donation to the Starlight Children’s Foundation, and can be reached on the platform here: https://heyswysh.com/