CommBank Stadium: So scarred are long-suffering Parramatta fans, they were not brave enough to start celebrating even when their side led 28-4 late in the second half of Friday night’s semi-final.

The Eels supporters have had their hearts broken too many times – but this was a night they should never have worried.

Parramatta smashed Canberra to book themselves a trip to Townsville next Friday for their first preliminary final since Jarryd Hayne’s giant-killing run in 2009.

Some fans felt cocky enough to start mocking Canberra’s Viking Clap. They booed Ricky Stuart every time his face was beamed on the big screen.

Things got spiteful late when Jack Wighton belted Mitchell Moses with his right shoulder, then finished him off on the ground.

A little earlier in the second half, Wighton also crunched Moses into the turf, prompting the halfback to stay down for a penalty, only to be instead sent for a head injury assessment. 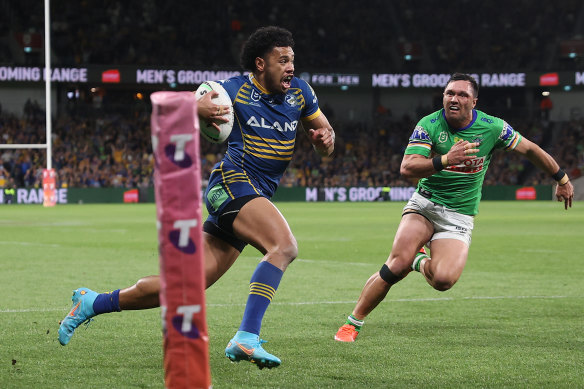 Waqa Blake makes a break to score a try.Credit:Getty

He was placed on report, but Wighton will have nothing to worry about. Had it not been for him, the scoreline could have got a little uglier for the Green Machine.

Some Eels fans will be wondering why coach Brad Arthur even bothered to put Moses back on the field, especially with the result all but sealed.

Much was made before the game about Parramatta’s September record. They had bombed out in week two of the finals too many times. Arthur and Moses had won just two of their past nine NRL finals games.

To make matters worse, there was talk of nepotism being an issue within the western Sydney club.

If we are being fair dinkum, Parramatta will have their work cut out against North Queensland. The good folk in the tropics have already sold out 1300 Smiles Stadium.

But the best thing about Parramatta is they always aim up when they are underdogs. They have not won a premiership since 1986. Beat the Cowboys and anything is possible.

While Moses was handy in his comeback game from concussion – the No. 7 can expect just as much physical punishment in seven days – five-eighth Dylan Brown was outstanding.

Brown rated his performance last weekend against Penrith a “four out of 10”. Against Canberra, Brown was close to a perfect 10.

He caused all sorts of headaches down his left edge, kicked at the right times, and his running game was phenomenal.

His grubber that nutmegged Xavier Savage paved the way for Tom Opacic to score for an early 10-0 lead.

In Savage’s defence, he got one back for the visitors when he raced 85m through some tired defence to score the Raiders’ only first-half try.

Both teams went set for set early before a Jordan Rapana knock-on invited the home side on the attack. They made the most of the blunder with a try to Will Penisini a minute later.

Things looked ominous when Waqa Blake steamed onto a Moses cutout pass to make it 16-0. They could have gone further ahead but Clint Gutherson was denied by referee Ashley Klein ruling the final pass from Brown forward, while Maika Sivo knocked on just before the line, even though the Sivo chants had already started to ring out around the ground.

Canberra needed to be one try closer at the break to make it a true contest.

For half an hour in the second half, Parramatta went through the motions. Top teams do not do that. Arthur will be aware of it.

Opacic also picked up a hamstring injury in the second half and failed to finish the game.

The Eels live to fight another day. So does Arthur.