There isn’t much dispute over who ranks as the premier player in the AFL. Dustin Martin’s influence on the course of games, finals and premierships has been more profound than any player over the past decade and probably greater than any since Wayne Carey’s imperious pomp.

Chris Judd might have been the undisputed No.1 for a time in his West Coast incarnation. Gary Ablett jnr’s record made him arguably the best, although it should not be forgotten that Lance Franklin, a key forward nonpareil from 2008, was in Ablett’s company for nearly a decade.

But if Martin has near-universal acceptance as No.1, four others – all very different players, with key shared traits – vie for the position of No.2.

Patrick Dangerfield and Nathan Fyfe have long been bracketed together. They are power-laden midfielders, who win contests on the deck, in the air, in the stoppages and can break out into space.
They are, as with most great midfielders, difficult to tackle and they have the same relative weakness – their ball use by foot is only proficient.

In 2021, two others in their mid-20s have joined Fyfe and Dangerfield in a quartet and deserve consideration as No.1 contender behind Dusty. 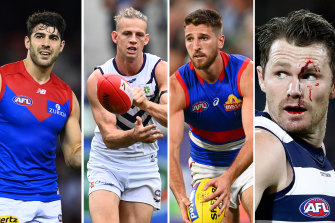 Marcus Bontempelli is 193 centimetres, moves with much of the grace and time-warping talent of Scott Pendlebury, and can be dispatched forward to pinch a goal. The Bont does not have the acceleration or raw power of Dangerfield and Fyfe, but is a superior ball-user. They are beasts, Bontempelli is an architect, in the mould of Sam Mitchell and Luke Hodge, but in a key position-sized body.

The new bull in the premier players’ paddock is Christian Petracca, who made the great leap forward last year and is definitely top five. Petracca, as with Martin, has a rare combination of brute power and finesse, capable of domination in the middle and snapping or creating goals in attack.

On Sunday, Dangerfield will return to the field after his three-match suspension, while Fyfe will carry the Freo midfield against an improved Adelaide and Petracca can be the decisive individual, again, this time against Hawthorn.

The official numbers are a touch generous to ruckmen, and while Gawn and Naitanui might be rated within the game’s top 10, they are still just behind the fab five, or if you prefer, Dusty and the next four.

There isn’t a standout key forward (despite Taylor Walker’s revival and Tom Hawkins’ 2020) and if there’s a player that challenges the top five, at least for impact on results, it’s the brilliant, brutal Toby Greene.

What is most striking about the fab five of today is that they are all inside and outside midfielders who can double as forwards, or as in Dusty’s case, play mainly forward. It is this capacity to spend time in attack – soaking up rotations while posing a scoring threat – that separates those five from Neale, Patrick Cripps and the rest of the midfield pack.

On the numbers alone, Petracca has been superior to Fyfe, simply by dint of his scoring capacity (20 goals to 11) and involvements, while Bontempelli has considerable growth if can he hit the scoreboard more often. Inaccuracy has been a failing for Fyfe (36 per cent conversion) and Dangerfield (42 per cent).

It is a sign of the times that the very best players are inside and out midfielders, with forward capability, rather than key position players. When was the last time the game was so owned by midfielders of a certain kind and there wasn’t a single key position forward in the top five or six?

The recent history of the national draft is instructive in terms of what clubs value. In 2017, the Brisbane chose Cameron Rayner, in the hope that he would be what Petracca has become. In 2018, the Blues opted for Sam Walsh, a pure midfielder, while the Suns selected Carey school mates Matt Rowell and Noah Anderson as a midfield package in ’19; last year, the trend was bucked by a few key forwards headed by Jamarra Ugle-Hagan.

In the preceding years, there’d been a curse on the key forwards chosen at pick one, as Jack Watts (2008), the now retired Jonathan Patton (2011), Tom Boyd (2013) and Paddy McCartin (2014) succumbed to either injury or off-field travails.

Clearly, picking key forwards is a riskier enterprise than bankable midfielders – presumably the logic that saw the Blues select Walsh ahead of prodigously gifted Max and Ben King.

In 2021, Bontempelli and Petracca should overtake Dangerfield and Fyfe, largely because they are entering their prime and have suffered fewer dents. Their team’s performances to date, too, have augmented their reputations.

Another challenger could well emerge in the course of a season that has a new set of AFL rules that rewards certain players – principally those who can run – and punishes those who don’t cover the ground. It is conceivable that a player with Bulldog Bailey Smith’s explosive speed and running power, will become as valuable as the inside/outside midfielder/forward hybrid.

Today, the only title up for grabs is that of the No.1 challenger.