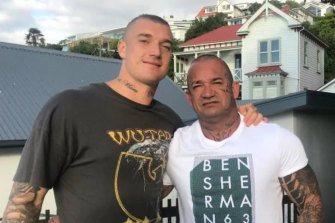 Mr Martin, a former outlaw motorcycle gang member, had been residing in New Zealand since 2016, after being deported from Australia in 2016 on the grounds of bad character.

“The club extends its heartfelt sympathy to Dustin, his brothers Bronson and Tyson and the entire Martin family,” the club said in a statement.

“We ask the media to respect Dustin and the Martin family’s privacy in this extremely difficult time.”

The circumstances of Mr Martin’s death are not yet known.

Mr Martin, a former Rebels bikie boss, attempted to return to Australia in early 2020 but was deported after flying into Sydney Airport and claiming he had Aboriginal heritage.

At the time his Australian visa was cancelled in 2016, then-prime minister Malcolm Turnbull said he was “proud” of his government’s deportation of Mr Martin, who continued to run his Sydney trucking company remotely from New Zealand.

Since his deportation, Martin had launched a number of legal bids to return to Australia.

Mr Martin’s wife Adriana and three adult children all live in Australia. Mr Martin moved to Australia at the age of 20 and lived in the country until the age of 49 when his visa was cancelled by then immigration minister Peter Dutton.

Dustin Martin has been recuperating from a serious injury which ended his season in round 18 when he suffered a lacerated kidney against the Brisbane Lions on the Gold Coast.

The Brownlow medallist was forced to spend nine days in hospital in Queensland and ended up losing approximately 15 kilograms.

The severity of the injury will end up precluding Martin from contact training for at least six months, with the club not planning on reintroducing the superstar to that part of the program until mid-January.

But given the tragedy he is now dealing with, it remains to be seen when Martin will be ready to return to Punt Road.