Anthony Griffin could only have been watching in complete horror as the Dragons put together their worst half of football this season in a 42-18 flogging by the Knights on Sunday.

The Dragons have managed a handful of encouraging performances in what has been another enormously underwhelming season as their list, on paper, has the talent required to be featuring in October calculations. 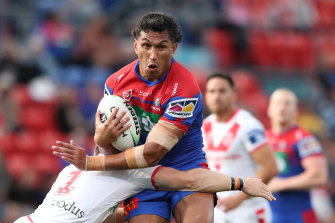 Jacob Saifiti joined brother Daniel on the Knights scoresheet in the second half.Credit:Getty

Right on cue, Daniel Saifiti scored a try from the following set and unleashed a verbal barrage in what appeared to be Tyson Frizell's direction.

Frizell – who will start his first pre-season at Newcastle in just a couple of months – returned fire.

It's hard to imagine what Frizell could have said as his team barely fired a shot all afternoon.

The match was over after 20 minutes. If the Dragons didn't return from the sheds for the second half, no one would have batted an eyelid. 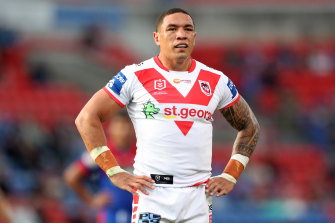 It’s difficult to imagine exactly how Tyson Frizell was able to return serve when he copped some lip from his a soon-to-be teammate.Credit:Getty

Shibasaki then did his best Dragons impression when he dropped the ball cold just a few metres out from his own line.

Zac Lomax made the centre pay when he beat Starford To'a and Enari Tuala and wriggled his way over for the Red V's first try of the afternoon.

At 24-6, the faintest of comeback hopes were alive if they could pull their act together in the second half. 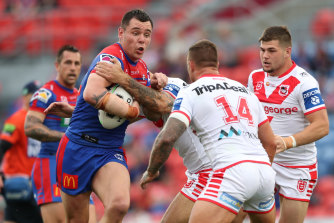 Cody Ramsey dropped the ball cold and a few tackles later, Mitchell Pearce put Tuala over to complete the 30-6 first half.

The two teams traded tries in the second – none more spectacular than Lomax claiming a high ball in what has become a regular occurrence for the rising star – but it was a meaningless 40 minutes.

The visitors finished with 15 total errors.

Griffin may have a talented list at his disposal but he will enter 2021 coach of the year calculations if he can turn around this sinking ship.

The Knights are going in the opposite direction under Adam O'Brien.

If they beat the Titans at Cbus Super Stadium on Friday night – which is no longer an easy task – they will earn the right to play their first home final at McDonald Jones Stadium since 2006 against Souths.

Resting Ponga last week proved to be a masterstroke.

He looked fresh as he zipped around the park and wreaked havoc with the sheer weight of possession the visitors coughed up.

He scored the first try of the afternoon, set up both Guerra and Tuala's second try and was easily Newcastle's most dangerous player with ball in hand.

If O'Brien has his side on song come the finals, they have the weapons to pack a punch and possibly cause an upset or two.

That has been O'Brien's primary challenge this season, aside from the club's injury toll: bridging the gap between their best and worst football.

Griffin will need to raise the baseline level at the Dragons if he is to mimic O'Brien and drag the Red V from pretenders to contenders.