St George Illawarra’s Rachael Pearson has nailed a golden-point field goal to secure a 19-18 win over Brisbane in Melbourne and book her team a spot in the NRLW finals.

The Dragons looked headed for a straight-forward victory at AAMI Park on Saturday until Brisbane skipper Ali Brigginshaw crossed with just over a minute remaining, with Tarryn Aiken adding the extras to lock the match up.

The Red V looked on the back foot early in golden point when Tara McGrath-West lost the ball in a tackle, but a successful captain’s challenge showed it had been stripped by Brisbane’s Amber Hall.

The Dragons then worked the ball downfield with Pearson kicking her team to a win from more than 20 metres out.

The halfback was also able to convert each of her team’s three tries, scored by Kezie Apps, Quincy Dodd and Elsie Albert. 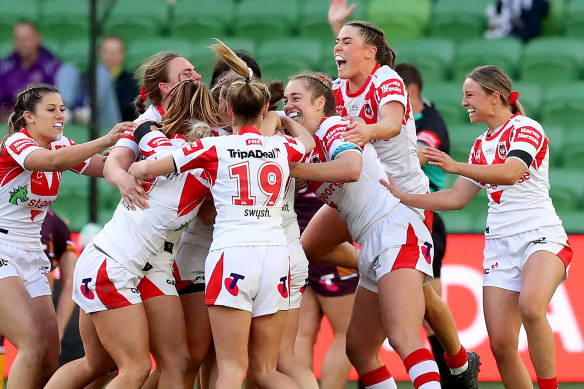 The win moved St George Illawarra onto six points, level with the unbeaten Sydney Roosters and Newcastle, who square off on Sunday.

It leaves the Broncos with just one win from four games and in danger of missing the semi-finals with one round to play, with Gold Coast joining them after an earlier win over Parramatta.

Forty-year-old prop Steph Hancock went to the top of the NRLW’s try-scoring charts as she helped keep the Titans’ season alive.

In a crucial match for both teams, the Titans raced out to an 18-4 lead at half-time before holding on after the break to claim their first win of the season.

The result leaves Parramatta winless after four rounds, with their season effectively over unless a string of results go in their favour over the next week.

The Titans, meanwhile, will live to fight another day, able to qualify for a second straight finals series if they beat the Sydney Roosters at Central Coast Stadium next Sunday.