In today’s AFL briefing, your daily wrap of football news:

Check back throughout the day for further updates.

The 24-year-old told the Dockers at his exit meeting on Thursday that he wanted to be traded to North Melbourne, after wrestling with the decision for several months. 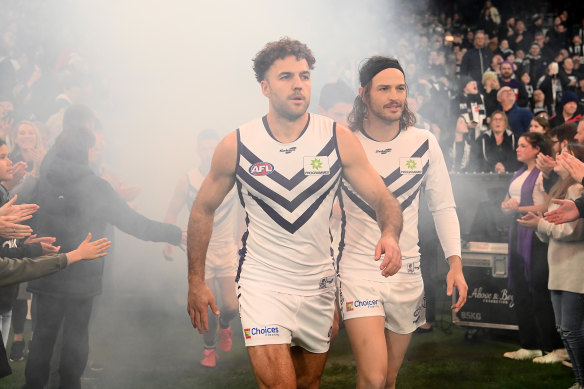 Fremantle’s Griffin Logue wants to be traded to North Melbourne.Credit:Getty

Logue had an outstanding season playing inside 50 for the club in the second half of the year after struggling to get a look-in as a defender alongside Luke Ryan, Alex Pearce and Brennan Cox.

He was dropped in round eight after receiving three coaches’ votes in the Dockers’ round-seven win over Geelong, which sparked the interest of several Victorian clubs including Richmond.

North Melbourne were able to point to the role he will play in the Kangaroos line-up, which prompted Logue to consider his options before the Dockers eventually looked to make him a four-year offer.

Fremantle’s football manager Peter Bell said on Thursday night that Logue had told him that his decision to ask for a trade had been “the hardest decision he had ever had to make”, with the West Australian top-10 pick joined by Blake Acres, Rory Lobb and Darcy Tucker in wanting a trade to Victoria.

Logue, Acres and Lobb played in the club’s two finals in the past fortnight before making the requests. The Dockers said they will refuse to entertain a trade for the contracted Lobb, who wants to join the Western Bulldogs.

North Melbourne have picks one, 55 and 66 but also have pick No.1 in the pre-season draft which gives them strong leverage in any negotiations to trade in players.

They are also waiting on an AFL decision on their submission to receive draft assistance with a decision expected to be formalised at an AFL Commission meeting on Monday.

Geelong and the Brisbane Lions, the two most consistent AFL clubs since 2019, are desperate to convert their home-and-away dominance into a premiership.

The Cats will enter Friday night’s preliminary final at the MCG as hot favourites after winning 14 straight games.

But the Lions have caused two giant upsets in this year’s finals series to rise from sixth and be on the cusp of their first grand final appearance since 2004.

Geelong have played off in six preliminary finals since their last flag in 2011, winning just one of them – against the Lions in 2020. But the ultimate success has eluded the Cats since they saluted 11 years ago, Chris Scott’s first season as coach.

After entering this year’s finals with a 1-5 record under Chris Fagan’s watch, the Lions have taken down the previous two premiers, Richmond and Melbourne, to shake off their MCG hoodoo and book a date with Geelong.

“Losing a prelim two years ago does teach you a few lessons,” Fagan told reporters. “The players did get caught up in playing a grand final, maybe, or didn’t appreciate the opportunity they had, being so close.

“They talked a bit this week that maybe they took it a bit for granted, maybe [thinking making a prelim and winning it] is a bit easier than they think.”

The Lions’ rise up the ladder has meant games with Geelong, the perennial premiership contenders, have taken on extra significance. In a classic match at Geelong last year, the Cats prevailed in a controversial one-point thriller as Scott and Fagan had a verbal altercation during the fiery affair.

Tensions have boiled over in numerous recent games between the teams, but Scott does not expect a repeat of the round-two game in 2021. “I’m not that way inclined and I don’t think he is, either,” Scott said.

Fagan respects Geelong but believes the Lions can show the same ferocity at the ball they have displayed since stumbling into the finals.

“I actually respect them [Geelong], they’re the benchmark with their consistency,” Fagan said.

“I guess we’ve become rivals because we’re chasing the same thing as a football club. They’ve played in a lot of finals over the last few years and haven’t been able to win a flag, and so have we.”