The Gold Coast Suns’ trajectory on the field and stability off it has seen Stuart Dew rewarded with a two-year contract extension.

Having redressed the problems of player retention and witnessed the improvement on the field, the Suns have re-committed to their popular coach Dew and resisted the temptation of the available four-time premiership coach Alastair Clarkson. 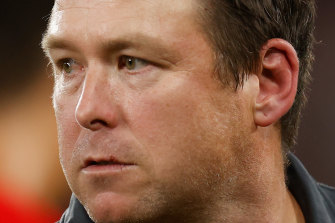 Stuart Dew will become the longest serving coach of the Suns in round 18 and has now signed two-year contract extension. Credit:Getty

Clarkson’s keenness to return to coaching this year has hovered over discussions surrounding all senior AFL coaches, but had especially loomed over the out-of-contract Dew given his connection to club chief executive Mark Evans, and the AFL’s concerns over the Suns. As the season wore on and the Suns performed well on the field, the shift to retaining Dew grew stronger.

There has never been a question of Dew’s popularity at the club, but the prospect of being able to attain a proven coach of Clarkson’s ability is difficult for all clubs to weigh up.

The re-signing of Dew raises a question of if, as well as where, the four-time premiership coach will be coaching next year? GWS has sounded out Clarkson for interest in the vacant coaching position as they undertake a process and form a field of candidates to replace Leon Cameron, while the future of David Noble at North Melbourne, where Clarkson played 93 games, remains uncertain. St Kilda are in discussions with Brett Ratten about a contract extension. 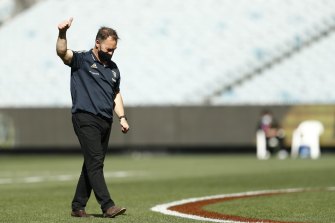 The Suns’ continued improvement on the field, such that they are still a chance for the finals this year despite losing their young key forward Ben King at the start of the year, was clearly one important factor in the decision.

More important, however, has been the environment created in recent years at the club, having turned around the player retention problem, with elite young players having re-signed and expressed fondness for Dew and a belief in the plan the club had mapped out.

The Suns have this year re-signed Touk Miller, Ben King, Jack Lukosius, Connor Budarick, Ben Ainsworth, Elijah Hollands and Mac Andrew. Izak Rankine is close to re-signing but is weighing up a heavy offer from Essendon.

Other top draft picks, midfielders Matt Rowell and Noah Anderson, had already signed contract extensions through until the end of next season.

The club has established a better culture, and stability around the group, since Evans came in as CEO, Craig Cameron was appointed as list manager, Wayne Campbell added as football manager and this year, the popular and respected Rhys Shaw joined in a development role and Steven King came on as another senior assistant coach. 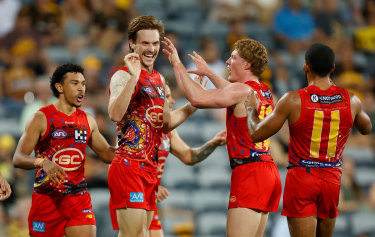 “I’m immensely proud to coach the Gold Coast Suns and I think with the help of some fantastic people around me, we’ve laid some exciting foundations to build on in the coming years,” Dew said.

“We have had an unprecedented level of commitment, support and dedication from everyone involved to create a connection to a journey that people believed in. I love this club and the game, and it gives me all the love back.

“We want to be a club that our members and supporters can be proud of. The support we have received from our community has been nothing short of incredible and will always be valued by myself and the playing group.

“The job is not done, and the best is yet to come.”

Dew will coach his 100th AFL game in round 18 which makes him Gold Coast’s longest-serving coach. This statistic is a comment on the Suns’ sorry start to life in the AFL.

“We’ve had real clarity from the start of this season on what our expectations were as a football club and our belief in our senior coach Stuart Dew,” said Suns chairman Tony Cochrane.

“Stuey has worked tirelessly alongside a number of others to create an environment that sets our players, and this football club, up for success both on and off the field, and we look forward to him taking us forward on that journey, as we continue to build a strong culture and a winning environment.”