Melbourne defender Christian Salem is adamant he and his teammates will be going “full on” during match simulation this week to stay fit and conditioned for Saturday week’s grand final.

The Demons will be playing just their second game in four weeks at Optus Stadium on September 25, which is in stark contrast to the Western Bulldogs, who have had to move around the country while playing every week. 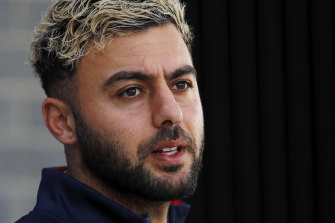 Melbourne defender Christian Salem speaking to the media at training on Wednesday in Perth.Credit:AFL Photos

Legendary football figure Leigh Matthews told 3AW on Tuesday that he would be preparing his team for a competitive scratch match on the weekend off, for fears they may lose momentum.

As it stands, Melbourne players will be put through match simulation on Saturday at Lathlain Park; the home of the West Coast Eagles.

Salem said it’s a balancing act between making the match practice highly-competitive, and avoiding injury.
“We’re still getting our match simulation in, but it’s just a bit more controlled, which helps us a bit and allows us to freshen up,” he told reporters before training on Wednesday.

“There is a fine balance … we’re going to go pretty hard. But it’s more; don’t jump into people’s backs when you’re going in for marks, sling tackles and what not.

“But when we are playing, we’ll be going full on.”

Steven May moved well during Wednesday morning’s session, with no strapping on his injured right hamstring, and is a certain starter for the grand final, barring another mishap.

Melbourne insiders believe the only possible change to the Demons’ line-up may be the injury substitute.

The versatile James Jordon has been the sub in recent weeks and came on for May in the third quarter of their preliminary final demolition of Geelong.

But Jayden Hunt, who has now returned to full fitness from an ankle injury, is pressing his case and remains a huge chance of being the 23rd man.

“Who knows, to be honest,” Salem said.

“The coaches have a pretty big job on their hands. There are a few boys in good form who are pushing the door down, but it’s still 11 days away so there are still a few more sessions to go and we’ll see what happens.”

Hunt has played 20 games this year and remains a possible x-factor for the Demons if they needed someone to come off the bench.