A combination of a calf injury and the premiership favourite Demons’ embarrassment of riches have limited the 33-year-old to just eight matches so far this season, including one in the past four months. 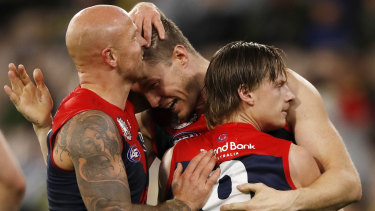 Goodwin made a bee-line for Jones, Melbourne’s captain from 2014 to 2019 and a three-time best-and-fairest winner, and embraced him shortly before the Dees linked arms for the team song following Saturday night’s resounding qualifying final victory against Brisbane at Adelaide Oval.

“Coming back from a calf injury, his last five weeks of match simulation of VFL footy have been outstanding,” Goodwin said of the 302-game veteran.

“He’s put himself right in selection calculations through form.

“Nate’s given an enormous amount to our club – 16 years of service.

“You certainly feel for him at the moment.

“I know the one thing Nathan would love to be doing is playing in the 22 and being a full part of it.

“His contribution around the locker room, change room, and at training is having a big effect on our playing group.

“He’s very proud of his footy club. If the opportunity presents itself, he’ll be ready.”

It will be no straightforward task for Jones to squeeze into such a strong side, which Goodwin insists is a cut above his 2018 outfit which endured a goalless first half en route to a humiliating preliminary final trouncing at the hands of the Eagles in Perth.

“We’re a completely different side than we were in 2018,” Goodwin said.

“We’re a lot more consistent in the way we play. We’ve put ourselves in a better position and we’re in better form.” 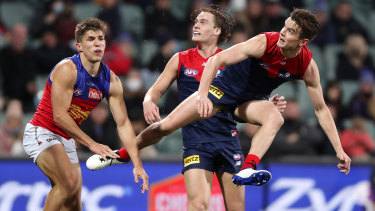 Forward Bayley Fritsch is in career-best touch, bagging four goals against the Lions, while captain Max Gawn, midfielders Christian Petracca and Clayton Oliver, and backmen Jake Lever and Steven May illustrated why they were all handed All-Australian jackets. 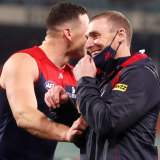 Melbourne coach Simon Goodwin was all smiles after the qualifying final win over the Lions.Credit:AFL Photos

After a free-flowing opening quarter, the Demons’ vaunted defence, statistically and rationally the best in the competition, answered every question Brisbane asked of it.

“Defensively after quarter-time, we were really sound,” Goodwin said.
“We tidied up some things behind the ball. We were playing the best offensive team in the competition and to keep them to five goals after quarter-time I thought was an outstanding performance.
“We’ve really established ourselves with the way we defend.”

The Lions will be without centre half-forward Daniel McStay for next weekend’s semi-final at the Gabba, where they will host the winner of Sunday’s knockout final between the Western Bulldogs and Essendon.

Concussed and bleeding heavily, McStay staggered off Adelaide Oval in the opening term against Melbourne after accidentally smashing his face into teammate Nakia Cockatoo’s knee.

His absence impacted Brisbane’s forward structure and will force a selection change.

“It was a decent hit – he smashed his nose and his face and had concussion,” Lions coach Chris Fagan said.

“You don’t normally have a player to replace a key position forward sitting there as the medi-sub. It changed things for us a fair bit. You practice a way to play, and suddenly one of your key pillars is not there.
“It was a blow, no doubt. Obviously he won’t be able to play next week under the protocols, which is a pity.”

Fagan is confident his side, the highest scoring in the league this year, can cover McStay’s absence and also challenge the inevitable external “overreaction” to a week-one finals defeat.

“We’ve been the best offensive team in the competition. We won’t jump off the ship after one poor performance,” Fagan said.

“I’ve been at various clubs who have finished top four, lost that first final, and been able to bounce back.

“We always tend to overreact to the team that loses that qualifying final and think the team that wins the elimination final is in great form. We had a number of players who played below their best and in a big final like that against a great team like Melbourne, you can’t afford to have any passengers.

“We worked hard to get the double chance, and we have the opportunity to bounce back. That’s what we’ll be trying to do.”