The Sydney Swans have recovered from a troubling $6.1 million loss in 2020 and are no longer one of the AFL’s financially “assisted” clubs.

Having lost $6.1m, depleting all their cash reserves of $4.5m and forcing them to borrow $1.5m from the AFL last year, the Swans have managed a significant turnaround by wiping off their debt to the league and becoming financially independent, or what the AFL terms an “unassisted club” during the pandemic. 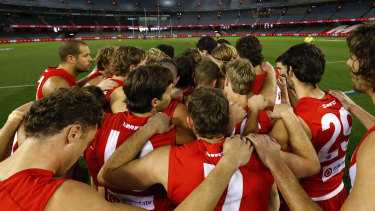 The Sydney Swans are no longer one of the AFL’s financially “assisted” clubs.Credit:AFL Photos

The Swans will be back in the black this year, a turnaround of more than $6m on last year’s loss, which the club attributed to the near-complete loss of crowds at the SCG.

Swans chief executive Tom Harley said the club would no longer be an AFL assisted club. “We’re going to be unassisted,” he said. “Debt free.”

Harley said while the Swans had played “negligible games with crowds” in 2020, they had been able to play eight home games at the SCG this year, with an average crowd of close to 30,000, in what was a key factor in the financial turnaround.

“We’ll have a strong operating profit and modest statutory profit,” he said.

The overall result, which is yet to be signed off by the club’s auditors, would include extraordinary items.

The Swans rank in the middle band of AFL clubs in terms of their financial strength, a position that also is reflected in the dividend they have received from the AFL, which is significantly less than the funding of expansion clubs Gold Coast and Greater Western Sydney and, to a lesser degree, the recovering Brisbane Lions. The league is reducing each club’s distribution from a minimum of $10m to a minimum of $8m, under what it calls its “variable funding” model.

Sydney will remain in that mid-pack position in terms of receiving AFL funding. The club’s business model is heavily dependant upon getting people to attend games at the SCG, where the returns are strong if there is a sizeable crowd.

Like other AFL clubs, the Swans had made major cuts in their administration, as well as in the football department, to lower their cost base during the pandemic. The club’s membership, which had fallen during 2020, rose from around 48,000 to exceed 50,000 in 2021. Corporate support has remained strong during the COVID-19 period.