A campaign that has never really got going hit another low point for St Kilda on Saturday night when they conceded a six-goal lead to tumble to a devastating six-point loss to the Adelaide Crows in humid and slippery conditions in Cairns.

In a season where the Saints had been tipped to even challenge for the top four, they have disappointed and head into the mid-season break with a 5-8 win-loss record, their finals hopes appearing all but dashed. 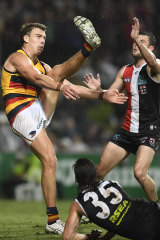 “I saw the ball and I kicked it,” Thilthorpe said of his stunning goal. “It’s an awesome feeling going into the bye.”

All of this came after they had taken 51 minutes to finally lodge their first score of the match.

Midfielder Rory Laird, having been curbed by Luke Dunstan until half-time, was superb after the main break for the Crows, while skipper Sloane worked his way into the contest. Paul Seedsman (31 disposals) was arguably best afield and continued his strong form.

The spotlight had been on Max King and his wayward set-shot kicking, having booted 3.11 in his five previous matches before this. But the emerging star responded with two goals, including one off the ground, and had a hand in several others, as the Saints’ pressure and tackling inside attacking 50 was telling in the first half.

The Saints had created turnovers at half-back, with Tom Highmore busy, and used this to counter-attack. Co-captain Jack Steele, Brad Hill and Brad Crouch were dominant through the midfield early but couldn’t get the job done with the contest in the balance.

Saint Hunter Clark was left with a broken jaw after a sickening collision with Crow David Mackay when both men were attacking the football in the second term. Clark lay on the ground for several minutes and was bleeding from the mouth when he left the field. The incident is set to be reviewed by the match review officer but four-time Hawthorn premiership star Jordan Lewis and Western Bulldogs great Brad Johnson said on Fox Footy that they thought it appeared to be one of those unfortunate moments of a collision-based sport. “Accidents happen … I thought it was a fair contest,” Lewis said.

For King and the Saints, it’s not simply about how many goals the young forward can kick but, as coach Brett Ratten said through the week, how many contests he can influence. And it didn’t take long for his first moment of significant impact when, having taken an intercept mark 60m out, he kicked long to Josh Battle, who handballed to Mason Wood for the Saints’ opening goal. His opening goal came soon after when he marked a well-weighted pass through the corridor from Dunstan, and converted from 45m directly in front.

Nothing to crow about

While the Saints’ forwards made a bright start, an organised defence was also influential. The Saints took nine intercept marks in the first term, leaving the Crows scoreless in the opening term for only the fifth time in their history. The Crows had to wait 51 minutes (nine minutes remaining in the second term) for their opening score, a point from Shane McAdam, and the same man followed up soon after with his team’s first goal. For the historians of both clubs, the Crows’ previous lowest first-quarter score against the Saints had been one point, in round seven, 1991 on a day Tony Lockett booted 12 for the Saints and Robert Harvey had 39 disposals.