Richmond battled to a two-point win over Essendon at North Port Oval on Sunday afternoon in the first AFLW Dreamtime match on the second weekend of the Indigenous round.

In wet, windy and then sunny conditions, the Tigers won 3.8 (26) to 3.6 (24) in a clash that came down to territory and pressure in a scrappy, gutsy arm wrestle, with plenty of long bombs, fumbles and hard-fought wins of the ball. 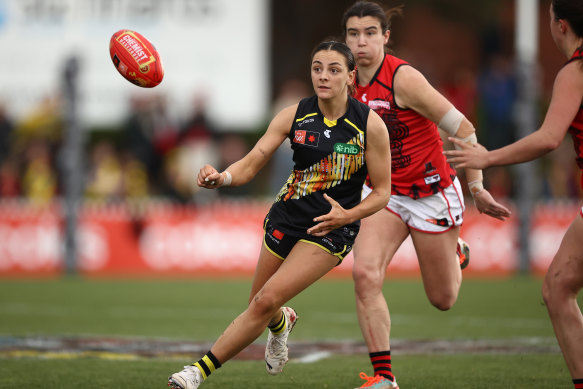 Monique Conti played a starring role for the Tigers.Credit:Getty Images

Opening the celebration was a Welcome to Country by Boon Wurrung Custodian and Senior Elder N’arwee’t Aunty Carolyn Briggs, who spoke of the significance of the occasion and importance of celebrating Indigenous culture within the women’s game.

“This is women’s day, this is about the matriarch … I celebrate all of you young women and your achievements to be here because it takes a lot of courage,” Briggs addressed the players and the crowd.

Essendon were dominant in the opening term, winning the territory and heaping on the pressure, with 11 inside-50s to 1, and doubling the tackling count 22 to 11.

Then in the second term, they were put under siege as Richmond gained the advantage of the breeze – which played a significant role all game – and had 13 inside-50s to 2 for the Bombers and won the possessions and clearances. 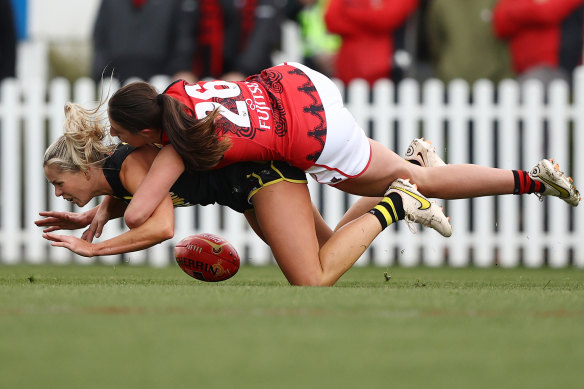 Katie Brennan of the Tigers is tackled by Essendon’s Ashleigh Van Loon.Credit:Getty Images

After the main break, both sides battled the downpour as well as each other in the wet. Each side tried to move the ball quickly and push forward at all costs, attempting to surge whenever in possession.

Richmond held a two-goal lead for the majority of the third term before Bomber Daria Bannister booted a late goal to reduce the margin to six points, setting the stage for an exciting fourth quarter.

The sun cleared for the final term, with Essendon claiming another late-quarter goal off the boot of Amber Clarke to reduce the margin to less than a goal, but Richmond held on.

The Tigers’ one-two punch of Ellie McKenzie and Monique Conti was lethal, and Sarah Hosking did a good job on Maddy Prespakis, keeping the prized Bomber to 11 disposals.

Carlton coach Daniel Harford, declared on Fox Footy’s commentary, that Conti was “without a doubt” the best player in the competition right now. Her use of speed, bodywork and clean, crafty possessions does make a case that’s hard to argue with. 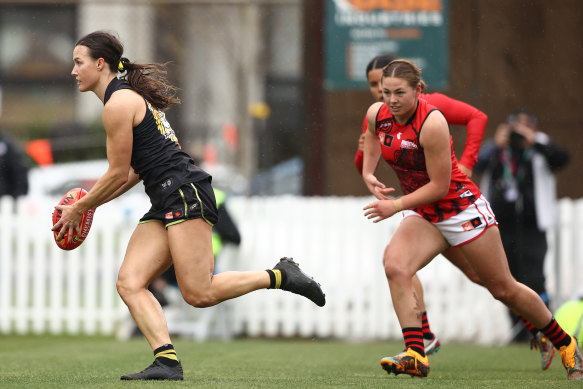 Tessa Lavey looks to kick for the Tigers.Credit:Getty Images

Conti, the league best-and-fairest favourite, also had an incredibly impressive one-hand gather and snap from the pocket to open the second half.

Grace Egan was also lively in the mid and ruck, while Gabby Seymour won the hitouts with 25 to 13 for Essendon’s Stephanie Wales. Tigers skipper Katie Brennan was also fierce in attack, back for her first game this season after being sidelined with a footy injury, but didn’t register a goal, ending her streak after 15 consecutive games with a goal.

Essendon co-captain Stephanie Cain was relentless, finishing with 16 disposals, five marks and six tackles, while Bannister applied constant tackling pressure and set up her side with scoring opportunities.

Essendon’s emerging star Paige Scott suffered a corky to her left thigh in the opening term after a tackle from Richmond’s Beth Lynch, but played the rest of the game with her leg heavily strapped.