Wallabies fullback Dane Haylett-Petty announced his retirement on Sunday after a 38-Test career.

Haylett-Petty gave no reason for his retirement but has battled with the effects of concussion for the past couple of years. 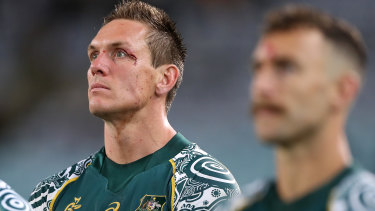 He suffered a knock in a Bledisloe Cup match against the All Blacks last year and failed to play in the 2021 Super Rugby season with the Melbourne Rebels. He tried to stage a comeback to top flight competition through Brisbane’s club competition but complained of lingering symptoms such as migraines when he exerted himself.

He was a gentleman in the Wallabies and Rebels set-ups, a stalwart in the No.15 jersey after Israel Folau’s departure and a quiet achiever.

“It’s not the way I wanted to finish,” Haylett-Petty posted on social media. “I would have loved to run out just one more time, but it wasn’t to be. Rugby has given me so much and for that I am forever grateful. The experiences, the opportunities, the challenges, and the lifelong friendships.

“Thank you to all the teams who gave me an opportunity, and whose jerseys I wore with pride. I hope in the future I can repay the game for everything it’s given to me. What an amazing journey it’s been, but I am so excited to start something new.”

Haylett-Petty scored 12 tries for Australia after making his debut against England in 2016. He played on the wing for the first two years of his Test career but moved to fullback when Folau departed in 2018.

He and wife Hannah welcomed their first child this year.

Meanwhile, Queensland flanker Angus Scott-Young is holding his own in New Zealand’s National Provincial Championship, picking up the ‘Warrior of the Year’ gong at his club’s awards night last week.

The former Junior Wallabies star was released by the Reds to play under Daryl Gibson at Bay of Plenty this season and made an impression, topping his side’s stats for carries and tackles.

And while the Steamers, as they are known, were knocked out of the title race with a 40-28 loss to Canterbury on Saturday, Scott-Young will be returning to Ballymore on a high ahead of the 2022 preseason.

Watch every match of the Wallabies, All Blacks & Springboks Spring Tours on the Home of Rugby, Stan Sport. Continues with Scotland v Wallabies on Monday morning – live and ad-free on Stan Sport from 12:45am AEDT.