Home » Rugby » Collingwood and Lumumba: a fairytale marriage that soured

Collingwood and Heritier Lumumba can be likened to a fairytale marriage that soured and broke down irretrievably and might never be reconciled.

When Harry O’Brien, as he was known then, arrived at Collingwood from Perth as a rookie in 2005, he spoke often about how grateful he was for the chance and how he would never let the club down. He and they might as well have exchanged rings. The honeymoon lasted at least until 2010 when they won a premiership together and he was All-Australian as a dashing half-back. 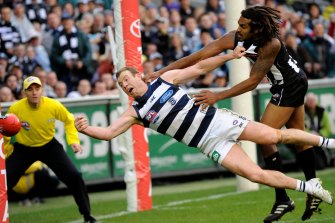 He was different, undoubtedly. He was celebrated for it then. That very September, he addressed a United Nations conference on global health in Melbourne, quoting Gandhi, also Archbishop Desmond Tutu: “What hurts one, whether or not we are aware of it immediately, hurts the other.″⁣ How those words resound now.

Initially, O’Brien was on his own account self-absorbed. Most young footballers are as they try to establish themselves. Early in that premiership season, O’Brien resolved to look outwards henceforth. He also said he did not define himself by football, but would use his football identity to campaign for a better world.

He changed. This was true down to the detail of his name. He would say that Collingwood didn’t change. Sound familiar?

Four years later, the relationship had darkened. Volatility is not unusual in the intense environment of a football club, which are full of strong characters and where everyone is only as good as last week’s performance. Connections quickly strain and just as quickly mend. But this union was broken beyond repair. 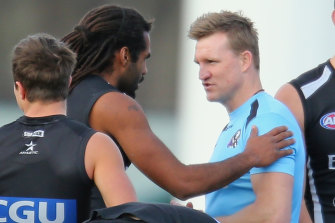 Exactly why, this column can’t and won’t guess. Like friends of divorcees, I’ve heard from both sides and feel sad for both. Race relations figured centrally, and they are a thorny enough issue for anyone at any time without me putting words into anyone else’s mouth or ascribing motives to them.

And as is also so often the case, it goes on. Lumumba has a new life in another country now, but shadowed by what was unresolved in his old. A couple of years ago, it spilled back into public view. The dirty washing flapped all over the place. The 2021 Do Better report seemed to clear the air, also the high offices at Collingwood. Might both parties find their peace after all?

A year later, it’s still a mess. Worse, it’s a half-public mess. There has been engagement, but how much is not clear. Mediation would seem to be the only sensible path. If this was, in fact, a failed marriage, that is how it would proceed. A judge would order it. This is where the metaphor breaks down.

Collingwood say they’ve reached out. Lumumba says it was not in good faith and so he won’t reciprocate. Lawyers letters have flown, a court action initiated and lapsed, and now it’s in the jurisdiction of social media, a dangerous place if ever there was. No-one yet has found justice there.

Tuesday brought new headlines, but no real development. Lumumba’s release of two short recordings which were claimed to have been excerpted from conversations with Nathan Buckley in 2014 told us only what we already knew, but in their voices. That added heat but not much light. Another escalation looks likely, unfortunately.

To this column’s ears, what stands out in those brief tapes is not so much the words, but the tone. In Lumumba’s voice, there is the remnant of real affection. In Buckley’s, there is heaviness. In both, there is a sense of something lost.

In his final speech to Collingwood, at that year’s Copeland Trophy count, Lumumba paid warm tribute to Buckley. “My first mentor at the club was arguably the greatest player in the club’s history, Nathan Buckley,” he said, “who guided me every step of the way, taught me what it took to be an AFL footballer, what standards you need to uphold in terms of discipline, relentless, excellence, and side by side.”

Recalling it now is like looking through an old photo album.

But in the same breath, more ominously, Lumumba also said this: “In 2014, we find ourselves at a very interesting time not only for this football club, but for this whole world. The landscape is changing, and I know that if the Collingwood Football Club is to go to the next level as a football club, it must stand on the right side of history.”