Mark it in the diary: the Melbourne Storm have lost four games in a row for the first time in seven years.

A team synonymous with success, Craig Bellamy’s men have slipped out of the top four and are entering “honest conversations” territory with each other after a deflating 24-12 defeat to South Sydney on Saturday night.

While it is easy to focus on the frailties of an out-of-touch Melbourne, this all-round effort from Souths was seriously impressive and has strengthened their premiership credentials.

After a blistering performance in Souths’ eight-point win over the Bulldogs last week, Latrell Mitchell underplayed his hand but was equally potent in a one-sided affair at Accor Stadium.

Mitchell’s stocks continued to soar as he set up winger Alex Johnston for two tries – the latter with a brilliant flick pass out the back of his left hand – to inflict further pain on the Storm and deliver Souths their fourth consecutive victory.

Souths led 10-6 at the break and piled on a further three tries to extend their record to a perfect 10 from 10 when ahead at half-time this season. 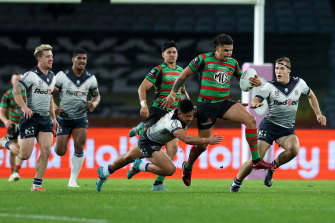 Latrell Mitchell makes a break against the Storm.Credit:Getty

Once again, Melbourne suffered without injured star Ryan Papenhuyzen, in the club’s sixth loss ever to South Sydney.

Bellamy doesn’t deal well with one loss, let alone four in a row. It is unfamiliar territory for a team that has not been outside the top two this late in the season since 2015.

There is a tendency for the cameras to pan to Bellamy when things aren’t going well but there weren’t too many eruptions in the coaching box, just silence.

The last time Melbourne lost four consecutive games was in 2015 – the year they bowed out in a preliminary final to eventual premiers North Queensland. 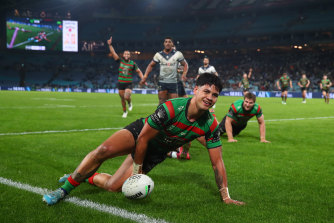 Souths duo Damien Cook and Cam Murray oozed class in their returns as Keaon Koloamatangi made life hell for Melbourne in the middle with 177 metres from 15 carries.

The Storm’s night began in horrible fashion when Nelson Asofa-Solomona was put on report for a high shot on Murray before Souths crossed for an incredibly easy four-pointer courtesy of Koloamatangi down the right edge.

It was uncharacteristic of the Storm and emblematic of their recent woes, particularly without the ball.

Melbourne’s ball control in the first half was woeful, gifting South Sydney valuable field position that they capitalised on. 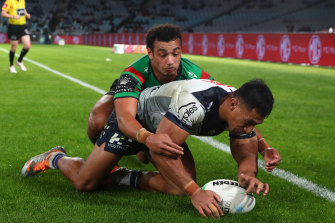 Marion Seve crosses the line on an otherwise frustrating night for the Storm.Credit:Getty

Good teams create something out of nothing and that’s what Melbourne did three minutes from half-time when Marion Seve burst through a regulation two-man tackle with Cody Walker and Isaiah Tass either side of him.

Seve sprinted 65 metres to score and reduce the deficit to four points at the break. Psychologically, it was an important moment for the Storm, considering they had only completed 65 per cent of their sets in the opening 40 minutes.

During the week, Storm legend Cameron Smith implored Bellamy to pick a fullback and stick with him for the season in Papenhuyzen’s colossal absence.

Nick Meaney, with three prior wins from four starts under his belt in the No.1 jersey this year, was solid but certainly didn’t solidify his position at the back. It’ll be a talking point moving forward.

After a 30-metre run inside his team’s half, that had fans jumping out of their seats, Mitchell threw a lovely long pass from second receiver to set up Johnston in the left corner and put Souths ahead 10-0.

The Storm cut the deficit before Johnston and Lachlan Ilias found the line to give Souths a healthy 20-6 buffer with half an hour to play.

Johnston nearly had a contender for try of the year with kick regather that he almost pulled off before Jaxson Paulo dived over in the 55th minute.