Last Thursday morning, in the painful aftermath of defeat in Origin I, NSW coach Brad Fittler gathered his players together at their base on the Central Coast for the obligatory video review.

He wanted to rip off the Band-Aid and move on to game two as quickly as possible. 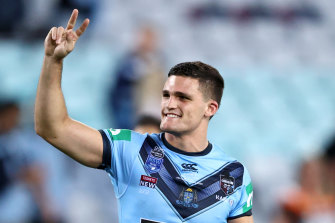 Nathan Cleary was stellar in Sydney but the mother of all Origin tasks awaits the halfback next week.Credit:Getty

If they can win in front of a hostile crowd, they will become the first side since the Andrew Johns-inspired Blues in 2005 to clinch a series at Suncorp Stadium. It will also be the first time since that year that the Blues have won three series in a row.

If halfback Nathan Cleary can perform as he did in this match, they may as well hand the shield over now.

Fittler believes Cleary represents the Blues’ future, but last night he most certainly represented their present. 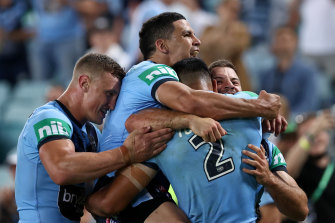 Daniel Tupou and the Blues celebrate.Credit:Getty

For the record, he finished this game with one line break, oneline break assist, three tackle breaks, four conversions, a 40-20 and also turned out the lights in the dressing room at the end of theevening.

What the stats don’t show is how he controlled the match and built pressure with calm aplomb, almost all of it through his kicking game. He was the dominant half Fittler needed him to be. At the age of 22, in the face of relentless criticism since Penrith lost the grand final to the Storm, it was some response.

NSW led 18-4 at half-time but – just like game one – the lead could’ve been more, such was their dominance.

Their cause was infinitely helped when Queensland lost five-eighth Cameron Munster in the opening minutes after his head thudded into the ground while defusing a Cleary bomb. 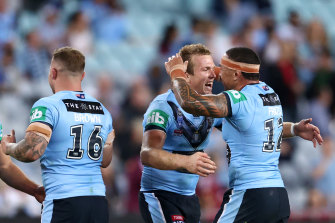 Jake Trbojevic (centre) was strong for the Blues at ANZ Stadium.Credit:Getty

The Maroons scored the first points when winger Xavier Coates leapt high and planted the ball in the corner, but then the Blues enjoyed field position and possession thanks to Cleary’s mature kicking game – and a couple of thunderous hits from Jake Trbojevic that forced turnovers.

In the 16th minute, Cleary breezed through the line untouched and, seconds later, Walker went over to level the scores.

Soon after, Cleary noticed Maroons winger Phillip Sami was up in the line on the last tackled so he kicked behind him, forcing Sami to turn and chase.

Addo-Carr pinned him in the in-goal and that pressure soon turned into points when Tedesco wrong footed Ben Hunt close to the line.

Even then, the Blues should’ve been further ahead. They lacked polish on their set plays.

A third try eventually came with three minutes before the break when Coates fumbled a Walker kick and, from the ensuring centre-field scrum, Addo-Carr crossed out wide.

The party continued for the Blues in the second half with a further three tries, with the only blemish a try to Josh Papalii.

There was even a rare all-in brawl – OK, wrestle – that saw Payne Haas and Tino Fa’asuamaleaui sent to the sin bin. 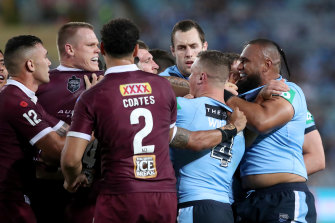 Maroon Lindsay Collins clashes with Blues forward Junior Paulo during game two of the State of Origin clash in Sydney on Wednesday night.Credit:Getty

Onwards, now, to the decider at Suncorp, which will be heaving with a partisan crowd, even if it’s at 75 per cent capacity because of COVID-19 restrictions.

Up until full-time last night, Queensland coach Wayne Bennett has been living large at the back of the bus, cracking jokes with his players, busting dance moves in the dressing room and suggesting those heathen reporters in Sydney should be drug tested.

Now the serious business of winning an Origin decider is upon him although – and this should be said with caution – you sense the ascendancy is with Fittler’s men.

They lost game one, then a critical player in Cameron Murray to a hamstring injury, then captain Boyd Cordner in emotional circumstances because of his ongoing concussion issues.

In this match, the Blues didn’t play like a club side but with the confidence of a state team that has won the past two series.

A third beckons but, then again, in the final episode of this strangest of strange seasons, who could possibly predict how it will end?