Home » Rugby » Calm amid the chaos: How Latrell and Walker saved an 11-man Souths side

Latrell Mitchell had to step away from Brad Fittler’s microphone during his post-game interview, overcome with emotion and blinking tears back as Rabbitohs fans roared their approval of a famous finals win.

That he and fellow Souths star Cody Walker – who was described as a “generational player” by his coach – kept their heads when everyone else lost theirs was the defining element in the Rabbitohs marching on and the Roosters season finishing at full-time on Sunday evening.

Twice reduced to 11 players due to multiple players being sin-binned within moments, South Sydney manufactured points when they shouldn’t have against 12 and even 13-man defensive lines.

Mitchell noted wryly during a post-game Fox Sports interview that he was “glad I wasn’t one of” the record seven sin-binnings, instead contributing a critical try and clutch sideline conversions in one of the most chaotic matches in recent memory.

Only when met with the raucous approval of fans – after a week when pointed booing of the Souths fullback was back page news – did Mitchell’s emotions get the better of him.

“The hurdles I’ve had to jump, the resilience I’ve had to have,” Mitchell said in explaining his emotional moment. 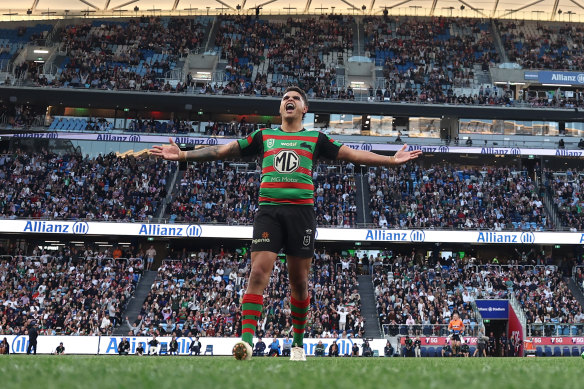 Latrell Mitchell roars to the crowd after nailing a sideline conversion.Credit:Getty

“I’ve been bashed down 10 times and I got up 11 [times]. It’s all worth it when you’ve got the support, I know it’s there and it outweighs the bad, I’m very grateful.

“The emotion of that game was through the roof. It’s just about how you control it.”

Walker too has often been criticised for playing angry this season.

But when the Rabbitohs needed someone to keep their head amid the chaos, Jason Demetriou reserved the highest praise for an afternoon that ended with four try-assists and five-star showing. 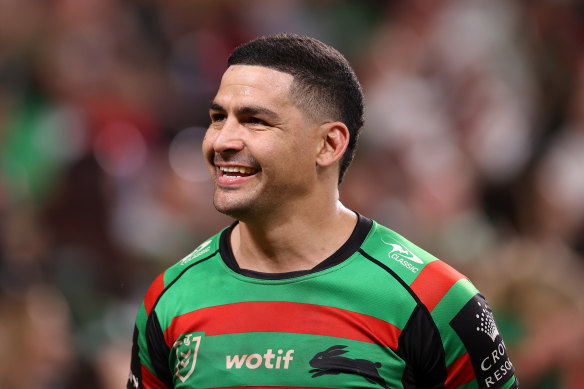 Cody Walker has been criticised for playing angry this season but cool heads prevailed against the Roosters.Credit:Getty

“[Walker] is a generational player in my opinion,” Demetriou said.

“What he can do with the footy, not many in the game can do. His game smarts and his ability to execute … the leaders spoke this week about the things they like of their teammates, what their fellow leaders bring.

“That was one of the things that Cody was spoken about – The right play at the right time. He’s playing with a smile on his face and it sets us up nicely for the finals series.”

Walker was humbled by Demetriou’s praise afterwards and was at a slight loss to explain exactly how he conjured up tries while short on attacking players.

His set-up play for Mitchell’s 22nd minute try in particular – drawing Sam Walker into a defensive error despite the Roosters boasting more numbers down the left edge –was right out of the Lyons playbook.

“You’ve got to find creative ways to find a weakness in that situation,” Walker said.

“I knew that Taane Milne wasn’t on the right wing but I still had my left edge intact … so we’d just find little ways and certain players that are off at certain times [in defence].”