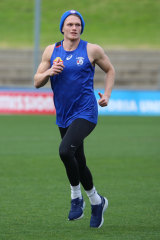 Western Bulldogs’ midfield bull Josh Dunkley is closing in on a return from a serious shoulder injury, while best mate Adam Treloar has buoyed hopes he could yet play a part in the club’s premiership quest.

Dunkley has not played since he was hurt and required a shoulder reconstruction after the round-six win over Greater Western Sydney in Canberra.

He has been running and completing non-contact drills, with the next step for him needing to show he can take heavy hits.

Dunkley has been targeting a round-18 return against the Gold Coast Suns at Metricon Stadium and sources at the Bulldogs maintain that is now a realistic option.

Having been denied his wish in last year’s trade period to join Essendon, Dunkley began this season in exceptional touch, averaging more than 30 disposals per game, while being a contested-ball machine through six wins.

The Bulldogs confirmed last week that Treloar’s return from an ankle syndesmosis injury was slower than expected, with coach Luke Beveridge conceding the former Magpie might not return this season.

However, there was more of an optimistic vibe on Tuesday when Treloar was able to put weight on his ankle and resume straight-line running. He still has much work to do and the Bulldogs insist there is still no timeline on a possible return, but they are hopeful he will reclaim his spot in the Bulldogs’ prolific midfield this season.

Key forward Aaron Naughton (concussion) will miss Sunday’s blockbuster against Sydney, while ruckman Stef Martin is still a fortnight from returning from a groin issue.

Carlton co-captain Patrick Cripps will need to prove his fitness ahead of Saturday’s clash against Geelong. 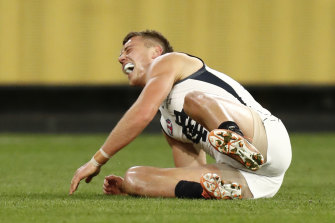 Cripps, having hurt his right foot when he accidentally kicked a Fremantle opponent on Saturday night, was in a moonboot on Monday and the Blues said on Tuesday a MRI had confirmed no structural damage.

Blues’ director of high performance Andrew Russell said a final call would be made at the end of the week.

“Structurally, the foot is fine and the MRI was clear: he’s got some inflammation in his foot,” Russell said.

Small forward Zac Fisher (ankle) and Will Setterfield (hand) are set to be available for selection, while Zac Williams will return from suspension.

Russell said Charlie Curnow (knee) was closing in on a return through the VFL, having not played a match since round 15, 2019.

“Those who have watched training have been really excited by Charlie, he’s moving really well,” Russell said.

“He’s coming to the back-end of that month’s block of conditioning that he needed to play. He’ll continue with that training block and is a chance to play VFL in the upcoming weeks.”

Collingwood said midfielder Josh Daicos will miss between four and six weeks because of a fractured finger which will require surgery. The Magpies said scans had shown “numerous fractures”. Daicos was subbed out at three-quarter time during the loss to St Kilda on Sunday.

Veteran defender Jeremy Howe (hamstring) is set to rejoin full training over the next fortnight.