Lance Franklin could become the third Sydney Swans player in as many weeks to make a miraculous early recovery from injury, with the superstar forward on track to face AFL pacesetters Melbourne on Saturday night.

Franklin was set to miss at least another one or two weeks at minimum with the bone bruising in his knee he suffered in Sydney’s derby defeat to Greater Western Sydney a fortnight ago. 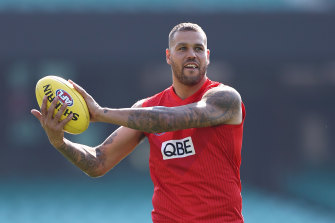 Lance Franklin is in line to face the unbeaten Demons at the MCG on Saturday night.Credit:Getty

However, coach John Longmire has confirmed the 34-year-old is surprisingly in the mix to face the Demons under lights at the MCG – along with co-captain Dane Rampe, who is almost fully recovered from surgery on a broken finger.

The Swans usually err on the side of caution when it comes to Franklin, but Longmire said he had only missed one week of running with the injury and, during that time, was still able to stick to the strength program the club has designed for him aimed at preventing any further soft-tissue setbacks, putting him in the selection frame.

“The bone bruising’s turned around pretty quickly. Once the swelling went out of it he’s been feeling really good. He ran, did a really solid session on Friday which was ahead of schedule, pulled up well over the weekend and then trained really hard again today.

“It was a lot shorter period that he wasn’t able to run than what we predicted, so that was a good sign. He was able to get in there and go again and get the miles in his legs, which is what we’ve always required from him, to make sure he gets to that level of training before we play. We’ll see how he is.” 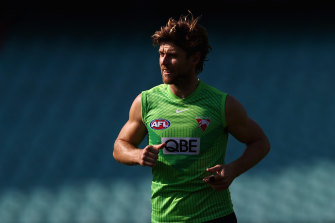 Dane Rampe is also in line to return for the Sydney Swans this weekend.Credit:Getty

If he plays, it would be Franklin’s first away match of the season, with all three of his appearances so far this year coming at home. It would also be an unexpected boost for the Swans, who are coming out of what had been a tough injury crisis much quicker than anyone at the club had anticipated.

Isaac Heeney was slated to be sidelined up to a month with a broken hand but only missed one game, while ruckman Tom Hickey defied medical predictions to return just one week into what was meant to be a two-month PCL injury and played a vital role in Sydney’s thrilling two-point win over Geelong at the weekend.

“I’m not complaining about it, put it that way,” a bemused Longmire said.

“What Hick was able to do on the weekend was incredible, he’s got obviously great courage. But also the ability to be able to put it to the back of his mind and get on with the job at hand was a real strength.

“He’s pulled up well, had a smile on his face today and should be right. It goes up a level again this week against one of the best ruckmen of his generation in Max Gawn.”

Both Rampe and Franklin need to get through Sydney’s full week of training unscathed to be considered a chance of featuring against the Demons, the only unbeaten team left in the AFL.

Rampe’s return would help offset the loss of key defender Lewis Melican (hamstring), while George Hewett is also likely to be available after missing the Cats match due to the AFL’s 12-day concussion protocols should be required to shore up the Swans’ back six.

“He’s a real chance,” Longmire said of Rampe. “He’s done a fair bit of training with us, he wasn’t marking the ball early on but then he was running around last week, catching the ball in training sessions, trained really hard again on Saturday.

“He feels good about himself. He was able to play a couple of games before he got it operated on as well, he’s quite capable of putting things to one side and get on with the job at hand, but the most important thing was to make sure he’s OK. It’s not just for a game of footy, it’s a bit more important than that for him.”