Home » Rugby » Brilliant Bulldogs have too much bite for Power

Not even the most rusted-on, one-eyed Western Bulldogs die-hard saw this one coming. But they are over the moon that it did.

The Bulldogs have done it the hard way, forced to navigate their way through the major round from fifth position and having spent the past five weeks – without respite – quarantining, flying and playing in Melbourne, Launceston, Brisbane, Perth and Adelaide. 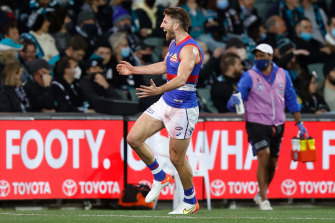 Marcus Bontempelli celebrates a goal during the Bulldogs’ win over Port Adelaide.Credit:AFL Photos

With their premier spearhead (Josh Bruce), No.1 defender (Alex Keath) and best small forward (Cody Weightman) sidelined, Dogs supporters had every right to believe their team would feel flat-footed and fatigued in Saturday’s preliminary final against Port Adelaide, well rested, near full-strength and justifiably warm favourites.

Instead, the speedy, skilful Bulldogs punched their ticket to a grand final date with Melbourne by conjuring a logic-defying demolition of a surprisingly inept Power outfit, scarred by preliminary final defeats in 2014 and 2020 and with the long-standing tag of finals chokers again rearing its ugly head.

The only sour note on an otherwise perfect night for the rampant Dogs came when emerging defender Laitham Vandermeer substituted out at three-quarter-time with hamstring tightness, the pre-grand final bye coming at the perfect time.

Port forward Todd Marshall also exited the match in the third quarter with a hamstring injury, adding injury to abject insult for the home side, which was belted off Adelaide Oval from the outset. 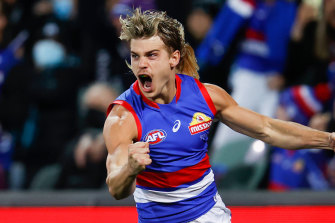 Bailey Smith in full cry for the Bulldogs.Credit:AFL Photos

The Bulldogs rattled off five unanswered goals before the Power could blink and marched to a whopping 37-point quarter-time lead.

It was more of the same in the second term as Port’s midfield continued to be overwhelmed at ground level, their defence error-strewn and their forwards simply not afforded a hint of a chance.

Bailey Smith bettered his career night against Brisbane last week with an even superior masterclass against the Power, Jack Macrae, as he has done all year, simply racked up the touches and the Bulldogs continued to dominate.

All eyes were firmly affixed on captain Marcus Bontempelli, who entered the match under a cloud after hurting his knee last week against Brisbane.

But he showed no signs of being hampered and his 45-metre bomb off a step in the dying moments of the second stanza blew the Bulldogs’ buffer out to 58 points at half-time.

Incredibly, it was a greater margin than Port trailed by at the main interval of their darkest hour – the 119-point grand final humiliation against Geelong in 2007.

The Power tried to save some face in the third stanza, employing a hard Willem Drew tag on Tom Liberatore, but the Bulldogs worked their way out of their mini-scoring drought to finish the quarter with a flourish and pave the way for a fourth-quarter procession, iced by further splashes of magic from Bailey Smith.

Melbourne will start the grand final as deserved warm favourites, but the might and fight of the Bulldogs simply cannot be discounted.

SCORCHING START
The Bulldogs showed they meant business from the very first minute of the match. Ruckman Stefan Martin, the fifth oldest player in the league, earned a shock recall and beat opponent Scott Lycett for the hit-out at the opening bounce. Tom Liberatore shrugged off Travis Boak to swallow Martin’s tap, handballed to skipper Bontempelli, who drove the Dogs into attack. The visitors’ hard-competing forwards kept the ball inside their attacking 50 and brilliant Bailey Smith, the Bulldogs’ hero in last week’s gripping semi-final win over the Lions and again on Saturday, snapped skilfully over his shoulder for the opening goal. The Dogs were away – and remained unmuzzled for the next two hours.