It doesn't seem that long ago that Queensland was so flush with rugby league talent that superstars were falling out of the selectors' back pockets like loose change.

That's because it wasn't. Only a few years back, at the tail end of a dynasty so enduring it felt to Blues fans like being stuck in a revolving door that yelled "QUEENSLANDER!" at you after each rotation, the Maroons still had names like Billy Slater and Johnathan Thurston to come to the rescue. 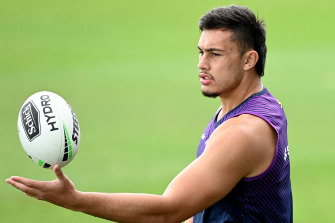 In contrast, the Blues and their coach Brad Fittler are enjoying the feeling of having their cup runneth over. Prop David Klemmer, who has battered the Maroons in recent exchanges, fell off the list, while the white-hot Cody Walker probably won't get a start given Luke Keary's claim to the No.6 jumper.

Will there be room for Storm fullback Ryan Papenhuyzen, who tore the Eels to shreds on the weekend, prompting Craig Bellamy to urge Fittler to consider him as a super-sub? Who knows. All we can say is that he won't be ousting James Tedesco, the hero of 2019 after sinking the Maroons with a match-winning try in the decider.

For Queensland, with walk-up starters like David Fifita and Holmes missing, along with leading wing candidate Kyle Feldt, perhaps the most brutal blow of all came when fullback Kalyn Ponga was revealed to be facing shoulder surgery and was almost certainly ruled out of the series.

Gold Coast Titans star AJ Brimson is a readymade replacement but he's untested at Origin level, although he won't be along on that front as Bennett and the selection panel, headed by Gene Miles, look for some bodies to fill their jerseys. 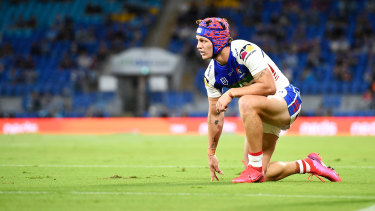 Kalyn Ponga is in huge doubt for this year’s State of Origin series. Credit:Getty

"When you look at the injury toll across the game, broadly, it was always going to have an impact on representative honours later in the season," former Maroons prop Petero Civoniceva said.

"It's become a real worry for Queensland and with Kalyn Ponga the most recent one of those with his shoulder. He's looking at surgery, which takes him out of the series."

Civoniceva was central to the Maroons era of dominance but sees opportunity in the absence of established Origin hardheads and proven performers. It's no surprise he can't wait to see the likes of Lindsay Collins, Moeaki Fotuaika and powerhouse Storm middle Tino Fa'asuamaleaui be sent into the fray.

"There's the chance here to hand a debut to some really exciting young players. I'm talking about Tino, Mo [Fotuaika] at the Titans, Lindsay Collins, that's just from the forwards perspective. There's an opportunity here. And when you put a Queensland jersey on, it's amazing how you can find a way to win.

"With Wayne Bennett taking over as head coach, he's done it time and time again in inspiring a group of players to lift and to find that something extra. We're going to need that in Origin this year."

Blues fans may already be counting their chickens but if the Queensland injury crisis has done anything, it's rekindled the underdog spark that started to flicker out in the midst of the Maroons inflicting yearly poundings on NSW for the best part of a decade.

But even in that historic run, Civoniceva said, then coach Mal Meninga constantly reminded them of the perceived historical wrongs and the inherent advantage of being born a Blue. He hopes Bennett does the same to the crop of 2020.

"That was a big part of the mindset, it was always spoken of, just some of the advantages NSW had in terms of the number of players they had to pick from for their squad," Civoniceva said.

"Mal did so well on that front, as well as connecting back to fans and communities. It sent a very clear message to the playing group… it goes a lot further than the people next to you on the field."