That Essendon have ended a crisis-ridden season in a crisis of their own making is beyond dispute. And while this unfolding predicament is man-made it's worth revisiting once again the Bombers' ill-fated decision to abandon their spiritual home and move to an isolated new base at Tullamarine.

Stepping into the Brisbane Lions' training rooms at the Gabba delivers living evidence that good people and not good facilities make great football clubs. But for all the Lions' relative lack of space, light and state-of-the-art infrastructure, Brisbane's home feels like a football club. 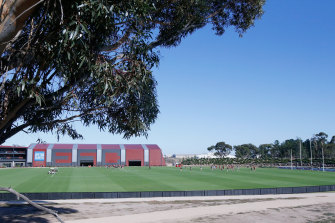 It is clear now that Campbell and his head of football Daniel Richardson disagreed on that coaching compromise, which failed in 2020, and has led to Worsfold departing with his reputation damaged and Ben Rutten denied his honeymoon period, having failed to win over his players. To pursue the disconnected theme, Lindsay Tanner, who empowered his CEO and played no leadership role, went AWOL even by his previous standards in 2020.

Now a new president has taken over, not of Campbell's choosing, who is starting to ask questions that should have been asked two years ago. Listening this week to under-fire Richardson's unapologetic backing of Rutten, the coach he lured from Richmond, it was clear that Richardson and Rutten stand together one-out as Campbell distances himself. Clearly the football boss and the coach have drawn a line in the sand against long-term poor football standards but this appears to have only further alienated the players.

It is 10 years since a group of us sat in the Essendon board room and listened to former chairman David Evans and his CEO Ian Robson outline the reasons why Windy Hillwas no longer viable as a home base for the Bombers. Evans spoke of the arms race in terms of AFL high-performance expectations and facilities – and how ill-fated those comments proved to be.

The centre opened three years later under a heavy cloud. James Hird had been suspended for a year by the AFL, the Bombers had been heavily fined and banned from playing finals and Evans and Robson were gone – high-profile casualties of the drug scandal. For the players worse was to come. Eighteen of those generous supporters who had helped fund the new facility were later to contribute $100,000 each to help fund the club's legal bills.

In a dispute reminiscent of St Kilda's crazy battle with the Kingston Council over 80 poker machines that led to one of the Saints' worst decisions in their 123-year-old history, Essendon's Windy Hill issue centred on a battle with the adjoining bowls club and one key member of that club's hierarchy. Having removed the cricket club the Bombers felt bowls, too, would willingly move to a bright new home to allow the football club the space to expand.

The hindsight view is that the battle could have been resolved through patience and that Essendon wanted more room and to start again anyway. Had an earlier proposal to set up a new headquarters at Keilor Park worked out perhaps the club could have created headquarters with more of a heartland feel.

St Kilda, boasting one of the biggest debts of all AFL clubs, blew $14 million on Seaford's Belvedere Park and set the club back seven years. Now they are back at Moorabbin; their supporters have a home to go to and geographically their players and staff have Melbourne's bayside and accompanying infrastructure at their fingertips. Just as the Bombers had Napier Street.

And, for that matter, the Dockers had one of Australia's most beautiful cities surrounding the old football club. The Fremantle market was a short walk away and you could smell the ships as they came into harbour. Now Fremantle have a $70 million "state-of-the-art" new home at Cockburn, again relatively devoid of heart and soul.

Experienced football bosses would argue poor geographical positioning can be fixed by the right design. Certainly Greater Western Sydney have achieved that with their cafe at the heart of their new facility which offers a welcoming vibe similar to that at Carlton and the Western Bulldogs. Richmond may have botched several key design features at Punt Road but remaining in the heart of Richmond will prove a triumphant legacy decision for the Tigers.

And Hawthorn should treat the Essendon experience as a cautionary tale. The decision to relocate the club to Dingley at a time when out-of-town satellite football operations seem fraught with risk has never sat well with many of the game's decision-makers. Even in 2015 when the
$130 million extravaganza was announced and the Hawks were flying in a premiership era and could attract any player or staffer at which it set its cap.

That is no longer the case. Hawthorn, which should count the move to Waverley as one of modern football's great decisions, have put Dingley on hold as they work to make sense of their future in a post-COVID world made up of savage football cuts, that may or may not include Tasmania and may or may not for some years include an AFLW side.

Boasting a footprint double the size of Windy Hill, the cavernous Hangar, futuristic fittings and fixtures, an MCG-sized training oval and one the dimension of Marvel Stadium has not exactly spelt success for the Essendon Football Club.

Get your finals’ fix delivered straight to your inbox with our Real Footy newsletter. We’ll have a preview of the matches and expert tips each Friday afternoon and on Mondays, chief AFL writer Jake Niall will wrap up the weekend’s play. Sign up to The Age‘s newsletter here, The Sydney Morning Herald‘s here, WAtoday‘s here, and Brisbane Times‘ here.