Carlton co-captain Patrick Cripps is out of Sunday’s important clash with Collingwood at the MCG.

Cripps copped a corked thigh in last week’s loss to Geelong and was limited to just 19 touches, but his injury has been listed as “soreness”. 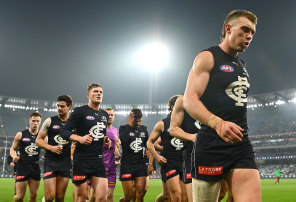 Patrick Cripps is out of the game against Collingwood due to soreness.Credit:Getty Images

The Blues captain – who last month re-signed with the club for a further six years – has not missed a game this season, but his omission lands a bitter blow to the club’s finals hopes.

Liam Jones and Zac Fisher come into the Blues’ line-up, with Lachie Fogarty (managed) and Will Setterfield (omitted) from the side that lost to the Cats.

Robert Harvey is backing in the team that beat Richmond, with last week’s sub Trey Ruscoe filling the void left by injured utility Will Kelly. Mason Cox, Caleb Poulter, Tom Wilson and potential debutant Jack Ginnivan are among the emergencies who could play as the medi-sub.

The Eagles will be without Tom Barrass and Brendon Ah Chee, who are both injured. Adam Simpson has brought in Connor West and Harry Edwards to fill the voids. Brodie Smith and Nic Naitanui will share the occasion for their 200th games.

Sydney remain unchanged from their win last week over the Bulldogs for their derby against the Giants, with Nick Blakey lining up for the 50th time. Stephen Coniglio returns for his side, with Matt Flynn replacing the injured Shane Mumford. Lachie Whitfield will also miss due to concussion.

And Dyson Heppell has returned for Essendon’s game against North Melbourne, which has been moved to the Gold Coast. Kyle Langford misses due to injury, while Sam Durham makes his debut for the Bombers.

The Roos have managed Ben Cunnington, who was among his side’s best players in last week’s win over West Coast.