Early on Wednesday morning, the NSW players rolled out of bed at the Pullman Hotel at Sydney Olympic Park, got dressed, had breakfast, caught a bus to Bankstown Airport, jumped on a chartered flight, landed at the RAAF base in Adelaide, caught another bus to the Mantra Hotel in Hindmarsh Square, had something to eat, had a massage, caught another bus to Adelaide Oval, pulled on a sky blue jumper, played a State of Origin match, rushed through some post-match interviews, had a shower, changed, caught another bus to the RAAF base, jumped on another plane, landed at Bankstown then jumped on one last bus before finally falling into the same bed at the Pullman Hotel almost 20 hours after they got out of it. 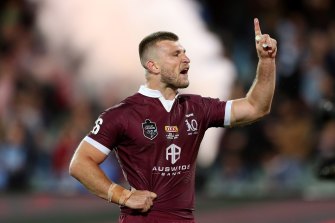 Arrow points way: Jai Arrow after the siren in Adelaide.Credit:Getty

The Blues had one last roll of the dice with a minute to go and came up with nothing.

The weird thing is, in the first half, a Blues victory seemed assured.

Apparently, Queensland’s best chance was to start well, to score points or at least stop them in the first 20 minutes, and they were handed sufficient opportunities to do so. Apparently.

Damien Cook fumbled from the kick-off, Daly Cherry-Evans missed a penalty goal from in front, and then the Maroons wasted several sets on the Blues' line after Luke Keary knocked on from dummy half.

The Blues have strike all over the field but when they roll through the middle of the pitch, with quick play-the-balls against a tired defence, with Cook scooting out of dummy half or passing to Jake Trbojevic or James Tedesco, they are near unstoppable. Apparently.

A try to Cook in the 15th minute and then Josh Addo-Carr five minutes later got the party started but they kept fumbling their chances to score a third that would’ve buried the result before half-time.

Their inability to finish off tries led to panic in the second half.

Meanwhile, whatever Bennett — the master orator — said to his players had a magical effect. 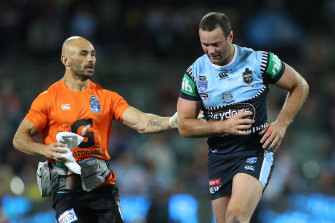 Boyd Cordner is assisted off Adelaide Oval for a head injury assessment.Credit:Getty

When Cameron Munster scored with 14 minutes remaining, and Cherry-Evans landed another tricky conversion to extend the lead to eight, the unlosable match was effectively lost.

Questions will be asked of the Blues halves, Cleary and Keary, and their virtual non-involvement in the second half. Cody Walker must start in Sydney.

Jack Wighton, the Dally M medallist, was shown up time and again by Gagai. So, too, Clint Gutherson by Capewell.

Questions will also be asked about Cordner, who has a well-documented history of concussions, returning to the field after leaving due to a head knock in the first half.

What none of us should ever question again is whether the Maroons can cause an upset.

This Queensland victory evoked memories of 1995 when Paul Vautin inspired the Maroons sans their Super League players to a shock win over Phil Gould’s NSW.

Next Wednesday, the Blues won’t have to worry about buses and planes and temporary check-ins to hotels in faraway states.

Just a leisurely stroll across the Sydney Olympic Park concourse to ANZ Stadium will do. There they face the onerous task of keeping the Origin series alive and taking it to a decider at Suncorp Stadium.

They captured the series last year after losing the first match. This year, against an unfashionable Queensland team inspired by the most super of all super coaches in Bennett, they have to do it again.