The NRL finally started shooting blanks, which – for once – was better than a blowout. In a year when points frenzies and floggings have been the norm, normality has been restored. Rugby league doesn’t always have to be about six-agains and the scoreboard incessantly going up in sixes.

Parramatta and Canberra played an entire first half without scoring a single point at Cbus Super Stadium. The last time an NRL game was scoreless at the break was when the Knights played the Sharks in the opening round of 2019, when a virus knocked you around for a couple of days instead of locking you in your house for months.

But something funny happened on Thursday night; people kept watching. Who knew low-scoring games could be so entertaining? In fact, the Raiders needed Jordan Rapana to sensationally bundle Maika Sivo into touch with five seconds left in one of the most controversial finishes of the year.

The Canberra No.1 raced across the field with Harley Smith-Shields and used his hip to collect Sivo, who spilled over the sideline as he tried to ground the ball for the match winner. Clint Gutherson argued the call, called it horrible, but he can’t argue that rugby league is just as good without many tries.

Peter V’landys and Andrew Abdo will reach for the television ratings on Friday morning, and it could be the best indicator to what they do at the end of the year with the rules. If the numbers are strong, maybe defence is not the dirty word some want to make it out to be.

On another channel, Graham Arnold’s Olyroos managed to ripple the back of the net against the might of Argentina before half-time in their opening match of the Tokyo Games. But there was something just as intriguing about two NRL sides bashing each other at the business end of the season and not being able to trouble the scorer. 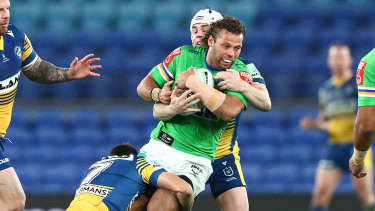 The players are cunning, too. They can make the rules work well for them, Canberra halfback Sam Williams blatantly giving away a set re-start inside the last 20 seconds of the first half with his team desperately defending their line. He knew he wouldn’t risk giving away a full penalty and the potential of two points.

When there was a score – five minutes into the second half – Raiders back-rower Corey Harawira-Naera singled out Eels coach Brad Arthur’s son Jakob and blew straight past him. Then Rapana scored, and the shambles the Raiders have been for most of the season looked a thing of the past.

They’re back in the top eight for the first time since April, grinding out a 12-10 win over the premiership heavyweights after a final tackle that will prompt debate for days.

After the first two Canberra scores, the Eels responded in a, well, Blake Ferguson-style way. The recalled winger almost dropped a kick, charged straight over the top of Hudson Young and Jarrod Croker on the return, sprinted downfield and wonkily chipped for Dylan Brown to score. On the first tackle.

How could you look away?

Sivo squeezed the ball down in the corner with four minutes left after Arthur’s deflected kick was flung out to him, but stand-in kicker Gutherson’s attempt never looked likely with Mitchell Moses watching on.

Canberra’s Josh Papalii ran himself into the ground in Queensland’s upset win, then went head first straight into it in a tackle on Oregon Kaufusi, prompting his withdrawal for a concussion test just before half-time. He didn’t return.

During his assessment they should have asked him what the score was, and it should have been enough to really confuse him.

But wasn’t it beautiful to watch.