Home » Rugby » Bellamy labels 2021 Storm ‘most dominant’ he has coached

Melbourne Storm coach Craig Bellamy rates his 2021 outfit as the most dominant regular season team he’s led, but planning has already started to ensure the side can turn a historic campaign into a premiership.

If the Storm beat the Parramatta Eels on Saturday, they will become the first NRL side to win 20-straight games after last week equalling the 1975 Sydney Roosters record of 19-straight wins, while the most points scored in a season and best for and against records are also in their sights. 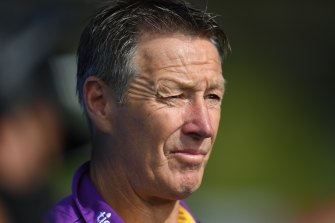 Storm coach Craig Bellamy is looking to lead his side to back-to-back NRL titles.Credit:NRL Imagery

Despite those results, the Storm are only two premiership points ahead of the Penrith Panthers on the ladder.

With the Eels game and next week’s final-round clash with Cronulla Sharks to come, Bellamy and his staff are already planning who they will rest ahead of finals and how they can avoid any letdowns.

The Storm’s success has surprised Bellamy given this season is the first to play without Cameron Smith, Billy Slater and Cooper Cronk.

“It’s probably been the most dominant if you just go on results,” Bellamy said on Friday.

“Usually the question is, “is this the best Storm team?” And as I’ve said before, that’s really hard to quantify when they’re in different eras as far as the rules and interpretations of rules and things like that.

“It’s a little bit hard to believe when [we’ve previously had] the big three that were here or when Greg [Inglis] was here the big four, how successful this team has been without any of those players.

“This is probably been the most dominant side throughout the competition before we’ve got to the semis [finals].”

Bellamy said he would wait until after the Eels game to pick who will be rested from the final round, but it wasn’t likely to match the 12 changes made to last year’s side as some players felt sitting out hurt their performance in the qualifying final.

NRL fans this week voted Storm hooker Brandon Smith as the best in the league after his stellar performance since coming into the starting role for the injured Harry Grant mid-season, the Storm now juggling both players in the role.

The Storm face further questions over how they will handle their rotations and interchange players in the finals with last year’s Clive Churchill Medallist Ryan Papenhuyzen, who has returned from a prolonged concussion, back as starting fullback leaving Nicho Hynes to play off the bench.

Bellamy said he agreed with the fans on Smith, although he questioned whether some were impressed by Smith’s off-field trickery more than his play.

“It’s hard to disagree [with fans] on what he has done earlier in the year,” Bellamy said.

“But I don’t know whether some of them voted for him on the back of him filling my bag up with rocks.

“We are probably not going to lose whichever way we go with those two – they are tremendous players and tremendous competitors.

“Whatever we do, I don’t think we can go wrong.”

Storm winger Josh Addo-Carr is also one try away from breaking the club record for single-season tries of 23 in 2017 that he shares with Suliasi Vunivalu.