Former All-Australian ruckman Luke Darcy says a basketball style tip-off may be the only way to protect rucks from knee injuries, but he would hate to see it replace the contest at the centre bounce.

As Collingwood captain Scott Pendlebury called for changes to be made to the centre bounce, Darcy said the contest should remain a part of the game despite serious posterior cruciate ligament injuries to ruckmen Brodie Grundy and Carlton’s Marc Pittonet in round six.

After a spate of PCL injuries to ruckmen from knee-on-knee collisions at centre bounce duels in the early 2000s, the AFL introduced a second centre circle, 10 metres in diameter, in 2005 to reduce the run-ups for ruckmen and limit the force at which they jumped into each other. 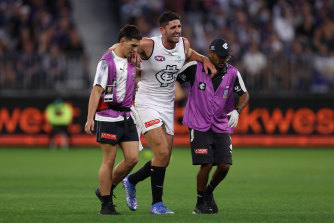 A 2009 study conducted by respected sports doctors John Orchard and Hugh Seward for the British Journal of Sports Medicine found the frequency of PCL injuries dropped significantly after the circle was brought in.

Darcy wants to see the data on the prevalence of PCL injuries before changes are made. He is unsure what can be done but knows what he does not want to see: a basketball tip-off where players compete in a jump-ball scenario.

“You make it a basketball tip-off, is where you end up if you start going down that path,” Darcy, an All-Australian in 2002 who played 226 games for the Western Bulldogs, said. “Not keen on that, not sure that’s where we’re headed.

“In a combat sport where you can’t reduce injuries down to zero, that [injuries] might be a part of it.

“Anytime someone gets injured you should have a think about it, but I’ve been around long enough not to see an obvious solution.

“Two people jumping flat out, even if it’s in a small circle, there’s always a risk. It’s how much of that you’re to be exposed to. Two in a week raises a question, I’m not super alarmed about it.”

The AFL is yet to release its injury report from 2021 but the PCL blows to Grundy and Pittonet follow similar injuries in ruck duels last year to Richmond’s Toby Nankervis and Sydney’s Tom Hickey.

The number of cases are not dissimilar to those in the six years before the circle came in (1999-2004) when there were 19 PCL injuries from centre bounce duels, at an average of just over three a year, according to the 2009 study.

The AFL could make the centre circle smaller or advise umpires to crack down rucks who do not watch the ball, as urged by former North Melbourne great Corey McKernan. But unless rucks are banned from jumping into each other, Darcy, whose son Sam is a prized young forward/ruck for the Dogs, sees PCL injuries as an unfortunate occupational hazard when the big men fly.

“I always felt, you’ve got someone charging at you, you’re partly responsible to half keep an eye on what they’re doing as well,” Darcy said. “I don’t think that works.”

Pendlebury raised the issue on social media but did not offer any suggestions on what changes could be made.

“With the PCL injuries from ruck, is it time to look at the [centre bounce] and changing it?” Pendlebury tweeted.

Stand-in Melbourne coach Adem Yze put the weekend injuries down to bad luck, and said ruckmen trained to protect themselves from such injuries.

“I think they’ve brought in the circle for that exact reason so that limits that contact,” Yze said. “I think they’ve just been two unlucky incidents that have affected two ruckmen in a comp and it’s shattering news for the guys.

“I know ‘Pitto’ [Pittonet] and he was in really good form.

“It is a risk when they do jump and jump into each other but that’s the game of footy, so they train for it. Our boys will do some ruckwork this morning and they’re prepared, and they know how to protect themselves.

“So, it’s obviously just unlucky that two players got injured on the same weekend.”