Home » Rugby » Bailey Smith didn’t know if he’d ‘get back on the straight and narrow’, Kennett calls for drugs policy overhaul

Bulldogs young gun Bailey Smith has spoken out after footage emerged of him with an illicit substance.

He thanked his parents, his girlfriend Gemma, and the Bulldogs for their support following the leaked footage of him with a white powder, revealing the aftermath of last year’s grand final loss to the Demons was a trigger for his mental deterioration when the video surfaced on Saturday.

“I just had to take that month off, and I didn’t know what my future looked like from there,” he said in the report.

“I didn’t know if I’d ever get back to good form, or get back on the straight and narrow.

“There have certainly been really dark days.

“Even now, I haven’t brushed my teeth in two days just because of this stuff.

“It does hit me, and I do get waves of chronic anxiety and it’s difficult.

“I reckon I went days without eating, even brushing my teeth, leaving my bedroom, I couldn’t talk to people [after the grand final].

“I didn’t go on my phone or anything, but that’s just what it was.

“I didn’t do any training, anything like that – I couldn’t even get out of bed to go to training.

“I’m sure lots of people have experienced that, and it’s not an excuse to why I acted the way that I did, but it certainly does provide context as to why I made such a stupid decision like I did.”

Smith told News Corp he wants to inspire people who’ve made the wrong decisions in life, or are struggling.

“There’s always rock bottom, but you can always pick yourself back up from there,” he said

“I own it, I don’t shy away from it … but it’s hard to own up to that when it’s such an embarrassing thing.

“It’s a period of my life where I feel ashamed.

“I’m extremely remorseful, embarrassed … it’s something I’ve got to live with.”

Meanwhile, Hawthorn president Jeff Kennett says the AFL needs to drastically tighten its illicit drugs policy, calling for a two-year ban without pay, after the league launched an investigation into footage of Bailey Smith with an illicit substance.

Kennett has long challenged the policy’s effectiveness, which will again come under scrutiny when the AFL completes its integrity probe into Smith’s behaviour. The 21-year-old Bulldog, who is already due to miss the next two matches after headbutting Geelong’s Zach Tuohy in his side’s loss to the Cats in round 12, will return to training on Monday with his teammates, but is likely to be suspended for at least another two weeks by the AFL. 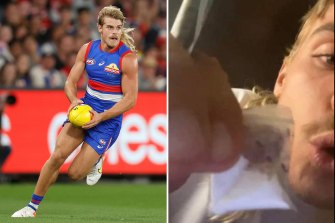 But Kennett says the AFL should instead focus on changing the policy, which he says, “favours those who want to take drugs”.

Kennett was Hawthorn president when Travis Tuck, in 2010, became the first player to receive a third strike under the AFL’s illicit drugs policy after he was found by police unconscious in his car following an overdose.

“The drugs policy has always been unworkable,” Kennett told The Age.

“I have argued for a long time that the AFL Players Association, when this policy was introduced, and I was there in my first term, and I argued against it strongly because it was ineffective, but the AFLPA was able to influence the commission and particularly [Andrew] Demetriou to put in a policy that was never going to be properly workable and would allow players to take drugs and if they owned up not have a strike recorded against them.”

Kennett says a hardline stance needs to be taken on illicit drugs in the AFL, suggesting a two-year ban without pay would offer a significant deterrence.

“The sad thing is the AFLPA argue they’re protecting an individual’s rights. I argue by having a zero tolerance policy, we’re potentially protecting their lives,” Kennett said.

“The ones that have trouble, that do take drugs, when the applause stops, when the whistle stops, when the play stops, if they’ve been on drugs for a period of time, they can often find themselves in a very difficult situation where they end up depressed and take more and more drugs.

“The AFLPA would argue they’re like every other male, etc. Well, they are. But to join a club, to join the AFL is a great honour. It presents great opportunity and wealth if correctly managed; therefore the rules should be, in my opinion, zero tolerance.

“And I think [the penalty] has got to be sufficient for the individual to realise the error of their ways. That means suspension and no pay. I would think it’s got to be for two years.”

Smith’s teammate Mitch Wallis said the club would wrap its arms around the popular Bulldog.

“It’s really unfortunate,” Wallis told Nine’s Sunday Footy Show. “Bailey has been in the limelight ever since he got to the club. No young person is immune from making a bad decision or two. 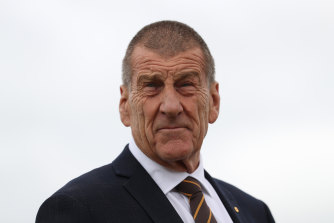 “He has let a few people down, but I know he is a good person at heart, and so we will do everything we can to support him and make sure he gets back on track and plays good football for this club for a long time.”

Essendon great Matthew Lloyd said that Smith may be able to turn a massive negative into a positive in the future.

“It might be the best thing that’s ever happened to him to get his life in order,” Lloyd said.

“He’s taken ownership and I have seen so many players ruin their lives when their footy ends, and they lose the support of their football club. Your life falls apart, and you spiral out of control.

“I hope this could be a real wake-up for him while he is still young to say, don’t wait until it’s too late before your life is totally out of control, and you have not got the support.”

Former footballer Josh Jenkins, who played 149 AFL games, said Smith would have to pay the price for his mistake.

“Hopefully, it’s a fork in the road for him,” Jenkins said on SEN’s Crunch Time.

“He’s got a bit to work through, he deserves to get some support, but you have to be responsible for your actions as well, and I presume that he will be.