Home » Rugby » ‘At 71, I’m not afraid to upset people’: Why Sheens is the man to rebuild Tigers

Rugby league is an assassin’s game in the sense that every high-profile individual eventually becomes a target, the shots often fired from hidden positions. To accept that bargain on a consistent basis, you need to have a motivation greater than personal gain, be it an unshakeable faith in your own ability, or belief in a higher being, or the conviction that all will come right at the end.

Tim Sheens is a survivor: a player, coach and administrator for more than 50 years. He says, “I have a favourite expression which is a twist on the cliche, ‘Time heals all wounds.’ In rugby league, it’s a case of ‘Time wounds all heels’.”

By heels, he means the cowardly assassins who can hug you in the dressing room while sizing up the place to insert the knife.

Nine years after being sacked by Wests Tigers in ignominious circumstances with three years left on his contract, he is back as director of football. But it’s a new chairman, lawyer Lee Hagipantelis, who identified him and followed up with frequent Zoom meetings while Sheens was working in England. And Simon Cook, the chief financial officer at Wests Leagues Club Ashfield, who brokered the financial settlement to avoid the Sheens dismissal going to court, is now the astute CEO at the money-making club.

“They’ve all gone,” Sheens says of those who sacked him. Wests Tigers is still a slightly schizophrenic entity in the sense it is a merger of two foundation clubs; plays at three grounds (Leichhardt, Campbelltown and Parramatta); has an inner west history and an outer west future, with a chairman whose dress sense is more talked about than his good sense and a Melbourne private school-educated chief executive who could take advice from his chair on how many buttons to do up on his shirt.

Not forgetting a coach, Michael Maguire, who appeared on a Fox Sports series sounding more like a man trying to change his image from a brutal taskmaster to a caring, cuddling mentor. 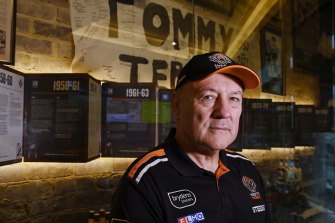 Tim Sheens is back in Sydney to start a wide-ranging role with the underachieving Wests Tigers.Credit:Kate Geraghty

However, based on the cheerful waves Sheens receives from 50 players reporting for work at the club’s nearly completed Centre of Excellence at Concord, there is a wave of optimism sweeping over Wests Tigers.

“I only know about four of the players,” he admits. He has already identified 21-year-old prop Stefano Utoikamanu as a talent. “He’s big and he carries the ball really well. We’re about to extend him.”

One player with whom he is familiar is Jackson Hastings. “I coached him as five-eighth in the All Stars team against England. He’s 103kg and, while he’s not super quick, he is strong. He’s a rock in defence on his side of the field. He can also fill the role of a ball playing No.13.”

“He’s different,” Sheens volunteers, before quickly adding, “I like different,” in the sense some players just want to get out there and play, rather than be mentally glued to a game plan. 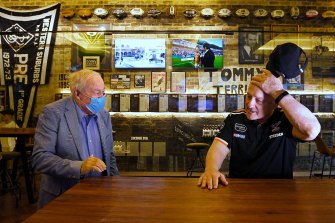 Essentially, Sheens’ role is “culture maker”, the man who must transform an organisation whose decline began under the independent chair Marina Go, appointed by the NRL when both halves of the joint venture owed money to headquarters. Four coaches (Mick Potter, Jason Taylor, Ivan Cleary and “Madge” Maguire) followed Sheens’ exit in 2012 and Maguire is entering his fourth season with results declining every year. So how can Sheens fix all this?

He is a believer in the Jack Gibson philosophy: “The first year, you assess. The second year, you do something about it. The third year you get results, or there will be no fourth year.” Significantly, he has a three-year contract.

Sheens is adamant he won’t interfere with Maguire. “I’ve never seen him coach,” he says. “He was a junior player when I coached in Canberra. Madge realises I’m not going to coach. He put the team together over three years. If he asks my opinion, I’ll give it.”

Quizzed on whether he has the power to sack the coach, Sheens offers a guarded response: “It is my role to observe and advise the club.” 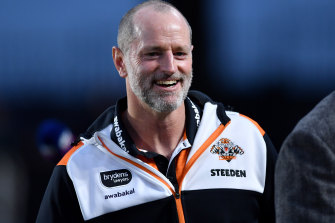 Sheens won’t be drawn on whether he has the power to sack current coach Michael Maguire.Credit:NRL Photos

Given the ubiquitous nature of his role – hiring staff, recruiting, advising – it’s clear the culture change will come via osmosis. That is, his work ethic and discipline will ooze into others to the point where players will stay behind after training to work on their weaknesses, just as Hazem El Masri carried a bag full of footballs in his car boot to practice goalkicking at a convenient suburban park. Or staff volunteer to work on their day off.

He calls this “discretionary efforts,” which is another way of saying team spirit. It is how it is done in Melbourne and Sheens coached Storm boss, Craig Bellamy, when at the Raiders. The lazy, selfish and undisciplined soon feel their presence.

It’s not as if he hasn’t returned before to successfully transform an organisation which dismissed him. In 1982, he was sacked as captain and player at Penrith by Charlie Gibson who had been parachuted in by the NSWRL to fix the club.

The following year, he played in Group 6, won the premiership and toured New Zealand with the Country team. One year later, Penrith asked him to return as Mr Fix It and he was occupying Charlie’s office. Only six players were on contract. He changed the player payment system to no one receiving a sign on fee and all were paid $1000 per match.

I have to go to my Wikipedia page to find out where I am in what year.

The leagues club boss, Roger Cowan, promised that when the club was profitable, “I will buy you Wally Lewis and you can put him on the bench.”

The plan was also to produce five Kangaroos in five years. It succeeded but at Sheens’ expense, with the Phil Gould-coached Panthers defeating the Sheens-coached Raiders in the 1991 grand final.
“A who’s who of superstars in 1991 – Greg Alexander, John Cartwright, Brad Fittler, Mark Geyer – had come up to be internationals after trialling on Jamison Park,” he says proudly.

In 1985 under Sheens, Penrith made their first finals appearance. Considering he was one of the “Boeings” – the 1973 Panthers team defeated 70-7 by Manly at home – it was a singular achievement.

“Making the semis for the first time for the club with players all on match payments is right up there with everything I’ve done,” he said. 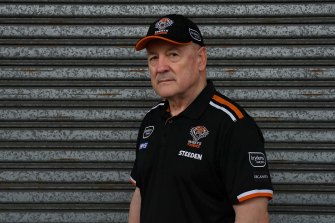 Sheens was sacked by the joint venture in 2012 with three years to run on his coaching deal.Credit:Kate Geraghty

Significantly, he hired two former first grade coaches – Len Stacker and Dave Bolton- as his assistants. If Maguire feels the imposing presence of Sheens, he should take comfort that his boss has previously appointed potential rivals as subordinates.

Sheens has also been sacked from coaching a representative team and returned to triumph. He coached NSW in the 1991 State of Origin series, with all three games decided by two points and two played in Brisbane, with the overall points tally only 32-30. Yet Sheens is the only Blues coach to be sacked after a single series. An argument over a code of conduct which NSW adhered to and the Maroons did not in the final match – Wally Lewis’s last Origin – would appear to the basis for his dismissal.

In yet another of the “ifs, buts and maybe’s” he identifies in a long career, Gould succeeded him as Blues coach, inheriting a young cadre of champions who won multiple series. But Sheens is quick to concede he has been the beneficiary of other coaches, taking over a top Raiders side in 1988.

But the “time wounds all heels” credo came to mind 18 years after being sacked as NSW coach when he was appointed coach of the Kangaroos. The offer came from rugby league’s then-resident peacemaker, ARL chief executive Geoff Carr, a man with a profound sense of justice. Sheens spent seven years as Australian coach, although twice in a two-and-a-half-hour interview, he was forced to open his Wikipedia page on his mobile phone.

“I have to go to it to find out where I am in what year,” he joked.

He resigned to join Salford in the English competition and then Hull KR, assuming management roles which prepared him for the Wests Tigers job because he had to oversee young coaches. Then he moved to Widnes Vikings.

“I did everything,” he explained. “It was back to Penrith days.” The pandemic shut down the club and he planned to travel Europe, taking out British citizenship. “I’m a Pom now,” he says, explaining that a dual passport makes travel easier.

But he is now committed to Wests Tigers, saying, “I do love the club. You can’t win a premiership here, the first for the joint venture, and not love it. The salary cap was $3.6m but we were on $3m because the club was paying the NRL $600,000 annually to defray a loan. We won a premiership in 2005 pretty much by outscoring the opposition, although we improved our defence in the semis, conceding only 12-14 points. But the greatest achievement was winning it on $3m. I don’t think anyone can do anything comparable again. It was a time when the wounds around the joint venture were very much open.” 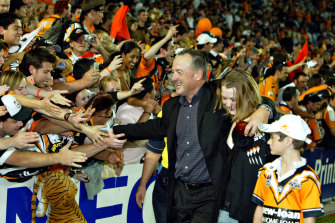 Sheens celebrates the Tigers’ stirring 2005 grand final triumph with the faithful at the Olympic stadium.Credit:Phil Carrick

Those wounds have all but closed as a generation has grown up knowing the club as only black, white and gold. He admires the Magpies for the manner they have allowed penniless Balmain representation on the board. He says of Wests Tigers 2022, “There’s a lot of work to be done but at age 71, I’m not afraid of upsetting people.”

It’s not as if he hasn’t worked with a Wests Tigers coach before. In 2002, with incumbent coach Terry Lamb already told he was finished and Sheens appointed for the following season, the pair joined forces.

“Terry was excellent,” he says. “I sat next to him on the bench. He tipped me about the players who were promising and the weaknesses of others. I was very grateful.“

Lamb, the most popular player of the past 40 years, is perhaps proof that the good, rather than the assassins, prevail.

“If you do the right thing, it all works out in the end,” Sheens says, the torrent of words in his head surrendering to the message in his heart.