The ARL Commission is poised to appeal the Supreme Court’s decision not to order fresh NSWRL board elections as the controlling body flags the prospect of cutting funding to the state organisation.

Justice Michael Ball found that the controversial elections should stand despite the improper exclusion of Cronulla chief executive Dino Mezzatesta, a decision that will allow the NSWRL to retain control of the Blues State of Origin team.

However, the fallout continues. The Sun-Herald has obtained a letter signed by 11 of the 12 NSW-based NRL clubs declaring they have “no confidence that the NSWRL board is capable of operating in accordance [with] the NSWRL constitution or of providing valid oversight over the activities of NSWRL staff.”

While the NSWRL trumpeted Justice Ball’s decision as a victory, he also found there was not currently a binding funding agreement between the parties, with the controlling body to retain discretion about the amount of funding.

The NSWRL receives about $20 million worth of funding a year, although ARLC chairman Peter V’landys flagged the prospect of a significant reduction. 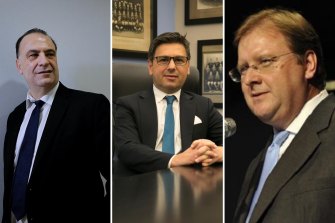 The lawyers have been the biggest winners to date, with the money spent on legal advice already reaching the six-figure mark. An appeal is likely to blow that out to about $300,000 at a time when many country league clubs are struggling to survive.

“We weren’t asking for anything other than running a fresh election so that the error they made was corrected,” V’landys said. “What hurts me the most is they are going to spend money that could have funded junior rugby league clubs who are battling and more so, they could have funded three or four regions in country NSW.

“The funds are badly used and they are affecting their constituents. And for what? For some sort of self entitlement that they shouldn’t run an election.”

“Those steps are aimed solely at ensuring that the Metropolitan Members are properly represented in accordance with the NSWRL Constitution, which is not presently the case,” the letter dated April 22 states.

“The result is that the NSWRL is not operating in accordance with the letter or the spirit of the NSWRL Constitution and the Metropolitan Members are being unfairly excluded from the governance of the NSWRL. This is a position that cannot be allowed to stand.”

Stream the NRL premiership 2022 live and free on 9Now.