Andy Farrell admits Ireland’s spirit will be severely tested after hopes of Six Nations glory were effectively ended just two games into the tournament following a 15-13 defeat to favourites France.

The Irish suffered successive losses at the start of a Six Nations campaign for the first time, and no country has ever recovered from that predicament to win the title.

Ronan Kelleher’s maiden international try helped keep the depleted hosts in contention against Les Bleus but they were unable to avoid another damaging setback following last weekend’s loss in Wales.

Head coach Farrell, who was without a host of key men in Dublin, including captain Johnny Sexton, has challenged his players to stick together and produce a strong finish to the competition.

“Our approach, our attitude doesn’t change,” he said.

“I’ve just said to the boys in the changing room that we talk about the strength of the group and the togetherness of the group and how close they are – we’ll see how close we are now, we’ll show our true character because it’s about finishing (the tournament well).

“We’re not even halfway through, but making sure in these next three games we’re at our best, and that approach doesn’t change no matter what.” Farrell was pleased with the response of his squad to a challenging week during which they lost several senior players to injury, but was left frustrated by their lack of killer instinct.

“(I have) mixed emotions, really,” he said. “One that’s unbelievably proud of how they’ve handled themselves this week, regarding all of the controversy, etc, unbelievably proud of their efforts – there are a lot of lads that are hurting mentally and physically by the obvious work rate, putting their bodies on the line for their country.

“But at the same time, Test matches are there to be won, especially at home and we rue a few decisions that we made along that way.

“Even though a couple of days ago people were writing us off, we never wrote ourselves off, the game was there to be won and it was a hard-fought contest but it’s one that slipped away from us in the end.”

But Ireland have been struggling to create chances in recent games and make their possession count, something they need to put right against Italy in Rome in two weeks’ time.

“Ultimately we’ve got three games left, our backs are against the wall and we have to pull out performances, for not only the next game but the next three games,” Henderson said.

“We’re definitely seeing progress, everyone’s trying their best to produce that progress on the pitch but I think it’s that last couple of inches. We just need to push it over the line.” 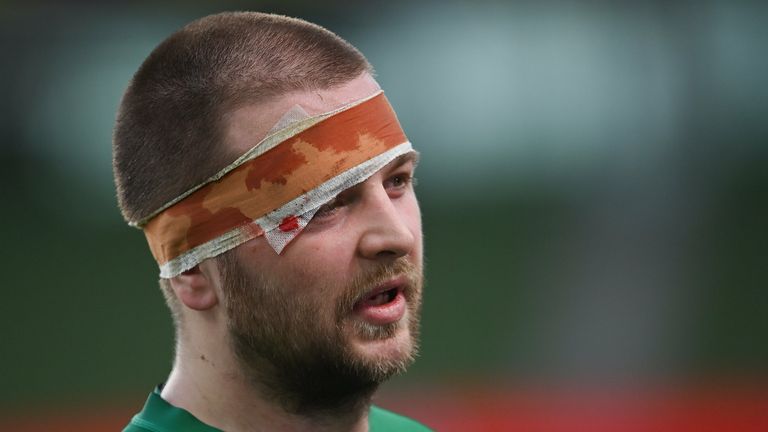 Our backs are against the wall.

Galthie: France will continue to improve

Farrell’s opposite number, Fabien Galthie, was thrilled as Les Bleus won their first game on Irish soil since 2011.

The rapidly-improving France team, who host the 2023 World Cup, top the standings with nine points, ahead of Wales on points difference.

“We were prepared to win the game, we won the game. It was our objective. That’s it,” said Galthie, who has led France to nine victories in 11 games.

“We have a lot of ambition, for all our games. We were ready to face the Irish. It’s interesting to tick the boxes. Each game is not a goal in itself, we have bigger goals. I think the team will continue to improve.” It was a sentiment echoed by France’s full-back Brice Dulin.

“This win is the result of all the work we’ve put in in the last 18 months. We’re not there yet, far from it,” said the La Rochelle star.

“We’re not satisfied yet. We’re picking up steam.”

Next up for France is the visit of Scotland to Paris in a fortnight’s time, while Ireland will travel to Rome.