Ed Langdon has lit a fuse ahead of one of the most anticipated Melbourne v Collingwood matches in decades, declaring the in-form Magpies can be “all duck, no dinner” and the Demons will be primed to end the Magpies’ winning streak.

Langdon, 26, said the Dees had a plan to bring an end to Collingwood’s 10-game winning streak and successfully stifle their opposition. 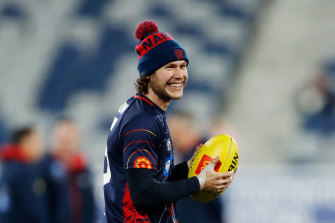 Melbourne regained some of their steely resolve with victory over Fremantle at Optus Stadium last week, turning the tables on the Dockers after they ended Melbourne’s 17-match winning streak earlier in the season.

“There’s certainly a plan in place,” Langdon said on SEN when asked about ending Collingwood’s momentum.

“Without giving away too much, it’s not too dissimilar to what we did to Freo last week.

“Our defence is definitely our biggest strength and to be honest we pride ourselves on making Friday night games pretty boring to watch for the spectators.

“They [Collingwood] are sort of all duck, no dinner in a sense that if they’re playing fast footy on their terms, they’re a very hard team to stop, but they’re a bit of a one-trick pony at times.

“So hopefully we can dampen the way they want to play and on the back of that go out and, ostensibly, play the way we want to play.”

The Melbourne wingman, a key member of their line-up during their charge to last season’s drought-breaking premiership, was anticipating a head-to-head match-up against Collingwood veteran Steele Sidebottom.

In selection news, key Melbourne forward Ben Brown will make his return in the blockbuster clash after a stint on the sidelines due to ongoing knee issues.

Demons coach Simon Goodwin said on Thursday that Brown was “feeling 100 per cent”.

“It was a great opportunity to give him some rest, give him some treatment on that knee and then reload it a bit in the right way, in a safe way,” said Goodwin.