A fresh pay war has rocked rugby league after player agents sought to claw back $2.5 million in bonus payments been granted to their clients for growing the game.

Under the terms of the collective bargaining agreement struck between the NRL and the Rugby League Players’ Association [RLPA], the players share in any significant upside or downside in the game’s finances. The players were forced to take a pay cut during the Covid period, but will be rewarded with an “outperformance payment” of $38.5 million after the game recovered to be in better financial shape than originally forecast.

Having fought to ensure clients are rewarded for their efforts and also fairly compensated for the cuts they took to ensure the game’s sustainability, the union has been hit with a new dilemma; now player agents want to take their cut of the spoils.

The player agents association (RLPAA) wants a commission from the bonus payments to players which, given most traditionally charge 6.5 per cent, would take about $2.5 million from their collective pockets.

The Herald has obtained a letter sent from the RLPA to the players stating that managers shouldn’t be entitled to their money.

“The player agents association (RLPAA) are of the view that agents fees are payable on these payments,” the letter states.

“Our view is that the out-performance payments do not form part of the Playing Fees received by players under the standard NRL Player Contract. Notwithstanding some inaccurate media commentary, such payments are not a reimbursement or back-payment of any agreed reduction in Playing Fees during Covid but represent the distribution of out-performance under the agreed mechanism in the revised CBA negotiated between the NRL and RLPA. 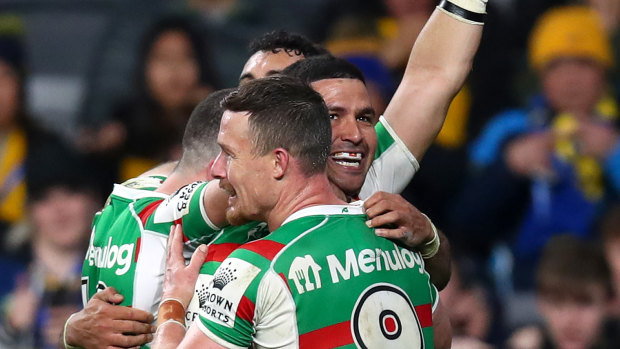 “It follows that in our view the out-performance payments are not subject to any authorised automatic agent fee deduction arrangements that may currently be in place between players and the Clubs. We have also consistently stated that if you and your agent want to discuss and agree a fee being payable to them in respect of the out-performance payments, then that is matter for each individual player. But it should not affect payment getting made by the Club to you in the first instance.

“We have been and will continue to endeavour to resolve this disagreement as a matter of urgency.”

The NRL has been approached to provide guidance on an issue that threatens to create tension between players and their managers.

South Sydney, NSW and Australian hooker Damien Cook – a member of the RLPA’s player advisory group – believes the agents aren’t entitled to a cut of the bonus payments.

“From that revenue share that the players are entitled to – and the managers aren’t – we are using that in good faith, distributing that back to players who took those cuts in 2020 and 2021, some are not even playing now,” Cook said.

“We could have put that all in retirement funds and nothing would have been said. It’s a revenue share for the game doing so well, it’s not a reimbursement.

“I spoke to my manager, Mario [Tartak], he was supportive of where we are at and that’s for it to go back to the players. I’ve got good support from him there.”

Asked if he hoped other agents would take a similar view, the Rabbitohs No.9 said: “I would like to think they have their clients’ best interests at heart. That’s why they do the job they do, that’s why my manager does that.

“Some of the players need that money back now. They have taken cuts over time.”