Though in the same footy universe, former North Melbourne coach Brad Scott is a world away from the bright lights of the MCG.

His name is often brought up in rumours of AFL club coaching or football department vacancies, but that’s not in his control. Instead, he’s focusing on his task at hand – as the head of AFL Victoria as the world continues to grapple with the COVID-19 pandemic and its effects across the community. 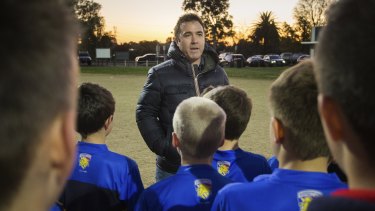 His is one of the most vital roles in football, and it’s one the former two-time premiership-winning Lions hardman has tackled with eyes wide open.

Scott knows his name will continue to be linked with clubland in the AFL, but he’s adamant that’s not a concern of his.

“I’m just so focused on what I’m doing that those things just aren’t a consideration for me,” he said.

“Who knows what will happen in the future, but my philosophy has always been to do the very best in what you’re doing at the moment, and I’m absolutely loving this role. I’m really passionate about it, [and] I think we can make a difference.”

Scott, by his own admission, “wasn’t really exposed to a great deal of community footy” as he was rising through the ranks.

“I’ve been really fortunate to be at the pointy end, at the elite end of the game, for my whole adult life,” he told The Age recently from the clubrooms of the ‘Marby Lions’, the Maribyrnong Park Football Club that produced such AFL players as Touk Miller, Luke Ryan, Rory Atkins, and Brody Mihocek.

“Even as a junior I played a lot of sports and I wasn’t really exposed to a great deal of community footy,” Scott said, adding he was taken aback by the sheer scale of around 1200 clubs and 90 leagues in Victoria, as well as 11 country commissions and nine major metropolitan leagues.

“It can feel a little bit daunting at times to try and assist,” he said.

“[But] the AFL’s role is not to come in and try and run football at community level. AFL Victoria’s role is to advocate on behalf of community football.”

Scott visited the Marby Lions prior to the latest COVID lockdown to provide some words of encouragement to some of their juniors, particularly those in coach Ryan Mistry’s under-12 division 1 side in the Essendon District Football League.

In 2021, they’re facing the same challenge as many developing juniors across the state – playing up a division after a full season away from the field.

And it’s shown in the win-loss column so far.

But footy, at its core, is about so much more than positions on a ladder. It has to be. 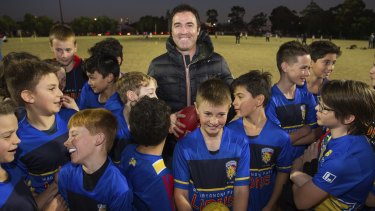 Former AFL coach Brad Scott passed on some words of wisdom to the Lions at Maribyrnong Park just prior to the latest COVID lockdown.Credit:Paul Jeffers

Maribyrnong Park president Andrew Brockfield spoke with pride about the job Mistry and the rest of the Lions’ coaches are doing at such a challenging time.

“We want to be competitive on the deck, whether it’s our best senior team, or our lowest age group junior team,” he said. “But, as a community football club, we do a lot more than just prepare people to play a game each week.”

Brockfield said Mistry, on multiple occasions after a heavy loss, would call his players’ parents to ask if he could check in on his young charges and how they felt about the game.

And that is the magic, and the importance, of community footy.

Scott said one of AFL Victoria’s biggest areas of focus was in attracting and maintaining quality coaching. It was Mistry’s story with the Marby Lions that inspired Scott to visit the club in the first place.

“When we look at the experience of kids, and what keeps kids in the game … people think it’s about winning and losing,” he said. “[But] the biggest thing that impacts a young boy or girl’s experience at a football club is the quality of the coach.

“It’s really interesting – in all our research, of all the factors [reasons] that kids play football, winning is fourth or fifth on the list. It’s not first, it’s not second.

“For the kids it’s things like getting out and playing with their mates, playing for enjoyment, improving their skills … therefore it’s really important for us that we continue to upskill coaches and really recognise coaches like this [Mistry], who just do a great job in challenging circumstances.”

“I think there’s a risk, in a once in a hundred years pandemic, that we don’t know what might happen if we do have these lost years – if we have these kids who just, for whatever reason, don’t play sport.”

In the wake of the community’s battle with COVID, and community footy’s in particular, Scott said there’s genuine uncertainty when it comes to the eight to 12 age group in metro Melbourne and their ongoing involvement.

“The main challenge from the under-8s to the under-12s has just been that when you miss a year of football, that Auskick or first year of community football is gone,” he said.

“But that’s only a small pocket … we’ve actually returned to greater than 2019 participation numbers across the state. 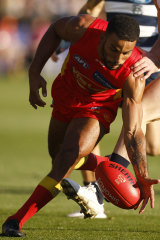 “[So] while we’re up overall in participation, this little weak pocket in under-8s to under-12s in metropolitan Melbourne … my concern is that if they’re not playing sport of any kind, what are they doing? They’re not playing other sports. It’s across the board.

“I think there’s a risk, in a once in a hundred years pandemic, that we don’t know what might happen if we do have these lost years – if we have these kids who just, for whatever reason, don’t play sport.”

Scott likened football to an iceberg.

“The elite game is broadcast on TV and everyone sees it,” he said.

“[But] what you see on TV is the tip of the iceberg. Underneath there’s this massive iceberg, which is community footy in Victoria.”

Scott spoke about taking on his role at AFL House in the first place.

“I really came to the AFL to broaden my horizons [in football],” he said.

“I was drafted out of school and never left an AFL club – I was there the entire time until I moved to the AFL.

“When I finished playing I wanted to go to a different club as an assistant coach because I wanted a different perspective, a different experience. I’d been at a really successful club, but if I hadn’t moved I would have had a really narrow view of the world and how football should be played.

“Going to Collingwood as an assistant really showed me a completely different way of doing it. [And] coming to the AFL, I was really keen to see the other side of football.

“You can’t really get the other side of football more than in community footy.”

The future of football depends on the community’s grassroots and the junior game.

Scott spoke about how vital it is for community footy to have “someone who is going into bat for them”, adding: “for me to do that, I have to get out and talk to the people on the ground.

“The big challenge in the role is that you’d love to have just a one size fits all solution, [but] every pocket has got unique challenges. We’ve just got to keep working, and I think my role is to get out and listen – get out and talk to people and find out.”

Scott said the importance of increasing participation is constantly front of mind.

“A lot of AFL Victoria’s role is to assist our leagues and commissions to make sure that we’re constantly growing participation, and we’re not doing anything that will be to the detriment of the growth of community footy and giving kids opportunities to play,” he said.

“We’ve got passionate people who are unbelievable at running community footy clubs – that’s not the role we play. The role we play is advocating on their behalf to help them, but also to get the kids into Auskick, to have really strong school programs, and then feed them into community football.”

Managing in the face of the coronavirus pandemic has also become part of the new reality.

“The return to play has been our primary focus,” Scott said. 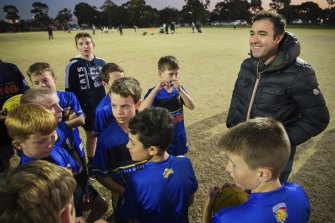 According to the AFL, the numbers of registered club football participants in Victoria – across junior, youth and senior football – are up from the same time in 2019. Country football registration numbers are particularly strong, they say.

The AFL’s 2020 Annual Report shows just how COVID-19 affected the game, with revenue decreasing by $119.1 million to $674.8 million “due to lower commercial revenues and revised broadcast rights agreements and lower commercial returns due to COVID-19 restrictions”.

The AFL has projected that the competition will be about $200 million down on revenue in 2021, compared to the pre-COVID-19 environment of two years ago.

But the AFL also says the competition – which includes all 18 clubs and the AFL itself – should be back to normal revenues in 2024, meaning the estimate is that the recovery from the pandemic will take almost three more years.

But, crucially, the Strategic Community Investment Fund (SCIF) – as part of the $18 million investment into Victorian community football announced by the AFL in 2019 – remains.