When Melbourne surged past the Western Bulldogs to win the grand final on Saturday night, no one spoke of the Demons ending a 31-year premiership drought.

And nor should they have. Because when the VFL became the AFL ahead of the 1990 season, it remained the same league, just with a different name. 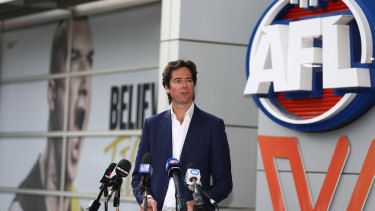 Gillon McLachlan outside AFL house where the men’s and women’s league logos are situated.Credit:Getty

The Dees’ barren streak dated back to 1964. It was 57 years between drinks, and there were no suggestions otherwise.

It is with that reality in mind that the AFL should seriously consider re-branding its men’s competition at some stage over the next decade.

Distinguishing between AFLW and “AFLM” has largely been the domain of passionate women’s football fans, but the case for making the latter label official is increasingly compelling.

Recent moves from the governing bodies of a couple of other major sports make the idea appear much less radical than it would have been even two years ago when my colleague Claire Siracusa wrote about the concept.

Last week, the Marylebone Cricket Club announced the word “batsman” would be replaced by “batter” in the laws of cricket as a move towards gender neutral language. The change seemed warmly welcomed for the most part, with only a smattering of opprobrium.

Then on Wednesday morning came the news that soccer’s W-League and A-League would both change their names to fall under the A-Leagues banner, with a distinction to be made between A-League Men, A-League Women and A-League Youth competitions.

That meant the end of the W-League brand, and the placement on equal footing – at least theoretically – of the men’s and women’s competitions.

Given both of those competitions are both 21st century creations, there is less history to be meddled with. 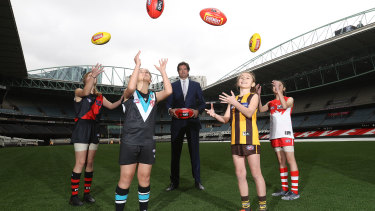 Changing AFL to AFLM would be a bigger move on several fronts, one, because of the sheer power of the AFL brand, and two, because it has been around for more than 30 years.

But the AFL name came at a time when the men’s competition was only just entering its professional age. The idea of a national women’s league would’ve been ridiculous in 1990. In 2021 though, women’s sport is being professionalised globally. Italy’s Serie A Femminile will go fully pro by the end of next year.

If you were starting a professional sports league from scratch, you’d have dual men’s and women’s competitions.

This is happening. England’s Hundred event in cricket, launched this year, started with both a men’s and women’s league. There is the Hundred men’s and the Hundred women’s. When not burdened by history, it’s a bit of a no-brainer.

Those against the idea of adding the “M” to AFL will ask why is it necessary when there is already a women’s league. If it ain’t broke, don’t fix it and all that.

But just as the move from VFL to AFL was made to reflect the nationalisation of the competition, a move from AFL to AFLM would signal the realisation that we live in an era when men’s and women’s sport should be held in the same regard.

The W at the end of AFLW is itself a strong brand. Just by saying “W” in footy circles, people know what you are talking about. The same sentiment came through on social media on Wednesday, with some W-League fans sad to see the end of what is folksily known as “The Dub”.

A child born in Australia from late next year will be born into an era of 18-team men’s and women’s AFL competitions.

If utopia is a full 18-team professional women’s league, just like the men’s, shouldn’t the names reflect that ambition?

The AFL said on Wednesday that it has no plans to change the name of the men’s league. But it is worth at least thinking about the idea. AFLM premiership celebrations wouldn’t be any less sweet.

AFL trade 2021: Stay across the moves, news and what it all means as our Real Footy newsletter goes daily for trade period. Sign up to get it here.