If there weren’t already warning signs on West Coast’s season, it can officially be declared cooked following their 109-point thumping at the hands of Richmond. Adam Simpson hasn’t used the word “rebuild,” but admits the club is in a “transition,” which means they’ll be using the rest of the season to determine what their list looks like beyond 2022. 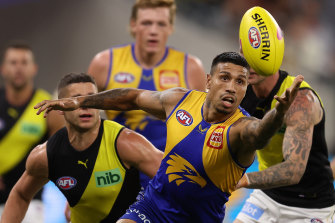 Richmond, however, look rejuvenated. Jayden Short played well through the midfield, Shai Bolton continued his electric form, and Tom Lynch flourished against the spiritless Eagles, kicking 7.5. Noah Balta went back into defence against West Coast’s tall timber. With Dustin Martin expected to return against Collingwood next week, it’s a chance for the Tigers to build some momentum heading towards the halfway point of the season.
– Damien Ractliffe

Fremantle are the real deal. They are organised, quick and skilful, and they value defence. Against Geelong, on the Cats’ home deck, Fremantle did the impossible and were better defensively than their opponents. Fremantle only allowed Geelong nine scoring shots in the first three quarters, the fewest scoring shots the Cats have managed in the first three quarters since 1964. And, after conceding 82 points to Adelaide in round one, the Dockers have not conceded more than 66 points a game.

Justin Longmuir was a key architect behind Collingwood’s surge up the ladder in 2018, and he looks to have the Dockers humming too with their talented young midfield, buttressed by a bunch of mid-sized key defenders. The Cats are a finals team but on the evidence so far, only just. Their contest work inside remains elite, but they were outspread, and they are vulnerable in defence when the ball hits the ground. The positives are Sam De Koning and Tyson Stengle, who are exciting, while the loss of Max Holmes to injury was significant. But the Dockers’ future looks much brighter with Jordan Clark’s performance rubbing salt into the Cats’ wounds.
– Peter Ryan 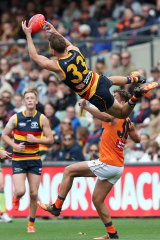 Brodie Smith was knocked out cold after taking this mark over Harry Perryman.Credit:Getty Images

GWS, as they did in the corresponding Adelaide Oval fixture 12 months earlier, bullied the Crows from the opening bounce to relieve some of the pressure on coach Leon Cameron. Adelaide had few winners and lost Brodie Smith to concussion after he hit his head on the turf on the way down from taking a magnificent mark. The Crows never really recovered from their landslide loss to the Giants last year and will be hoping this one doesn’t again cripple their promising progress.
– Steve Barrett

The Demons did what they had to do to keep their unbeaten record intact, and it was their leaders who steered the ship. Max Gawn was influential, while it was no surprise to see Christian Petracca and Clayton Oliver among the most prolific on the field. The Hawks threw challenges at the Demons, but at key stages class prevailed. Four unanswered goals in the “premiership quarter” helped the Dees keep the Hawks at arm’s length in the final term. Sam Mitchell was clearly disappointed for his players that they were able to get within 10 points but unable to overthrow the reigning premiers. He labelled it a missed opportunity, but Dylan Moore, Jai Newcombe and Jacob Koschitzke – all 22 and under – showed growth for the Hawks and would have given fans something to be pleased about. Games against Essendon and Richmond in the next fortnight will test their mettle as aspiring finalists.
– Damien Ractliffe

This was a game St Kilda should have won and, it could be easily argued, they would have if it had been played under the roof at Marvel Stadium instead of the humidity and dew of Cairns. Such are the commercial imperatives for a club scrambling to make ends meet. It may cost them a top-four berth or a home final, it may not.

From a football point of view, even though they lost the exercise should not be seen as a failure. The Saints did plenty right. They won the contested ball, were strong at the contest, but let themselves down with execution, particularly in front of goal. However, their game is in order. The impending returns of Jack Billings and Zak Jones should provide a point of difference with their class and speed. The Saints can still head into their exam this week against Melbourne with confidence.

In 2017, Sydney stormed into the finals after a 0-6 start. Port must view them as the blueprint. All is not lost at Alberton; they are still up for the fight. The increased responsibility given to Connor Rozee and Zak Butters has boosted the Power – and should reap richer dividends in the years to come. Ryan Burton is having a career-best season. Other than the grit they showed in coming back from a slow start, the most pleasing aspect from their trip to Cairns was the return to form of Aliir Aliir. It shows two things: the gun defender is regaining confidence on his return from ankle syndesmosis surgery, and Port are buying into team defence again, which gives someone playing Aliir’s role the time and confidence to make attacking calls to intercept.
– Andrew Wu 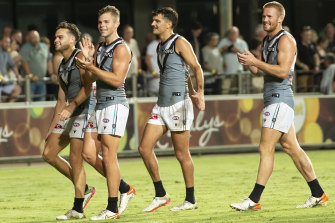 Defeating a battling opponent with only one win to its credit may not seem particularly special, but for Blues supporters accustomed over the years to watching their side drop matches they should win, this 50-point thumping of North Melbourne at Marvel Stadium was a sign of maturity. The Kangaroos pressed in the second term, but the Blues responded with seven third-quarter goals to all but secure victory. It’s debatable whether that would have happened last season. Tired of their third-term issues this season, the Blues responded in fitting style. Without the injured George Hewett, Marc Pittonet and Zac Williams, skipper Patrick Cripps continued his stellar season, and he has to be the Brownlow Medal favourite. In twin towers Harry McKay and Charlie Curnow, the Blues have the firepower to rebound from any position. The Kangaroos were undersized, and paid the price. The Blues have the Crows at Marvel Stadium on Sunday, and should improve to a 6-2 record. 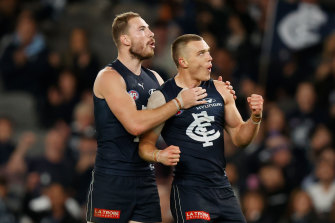 For the Kangaroos, the pain continues. Jason Horne-Francis′ hard work and spirit are admirable, and he shapes as a star. Jy Simpkin was again strong but the Kangaroos’ lack of pressure after half-time was damning. They remain in a deep and troubling rebuild. To add to their troubles, they now face the Dockers in Perth. In the short term, it’s about giving the youngsters a run and deciding whether they should pursue a priority pick and/or make a play for Alastair Clarkson.
– Jon Pierik

Jack Ginnivan kicks a goal of the year contender.Credit:Fox Footy

Darcy Cameron and rookie ruckman Aiden Begg could not match Gold Coast captain Jarrod Witts at rucking contests, but their competitiveness around the ground, combined with the Magpies’ ability to almost square the ledger in clearances (-3) was a positive for Collingwood on Sunday. If Cameron can continue to kick goals, as he did early against the Suns, he will be even more valuable. Coach Craig McRae all but confirmed the combination will be preferred against Richmond next week as the Magpies look to cover the absence of Brodie Grundy for the next three months. The Suns enjoyed some dominant patches on Sunday but coach Stuart Dew was clearly frustrated by their inconsistency and lack of defensive intent, particularly in the opening term when they conceded seven goals. With just two wins and clashes against Sydney and Fremantle to come, their season is teetering on the brink of being disappointing at best yet again.
Finally, an Anzac Day medallist against Essendon, Jack Ginnivan put himself into contention for goal of the year honours after a stellar second-term major against the Suns.
– Courtney Walsh 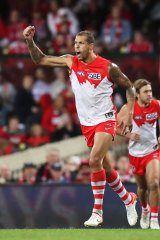 If the Bombers thought they had turned a corner on Anzac Day, they received a reality check on Sunday against a hungry Bulldogs outfit. The Dons had 26 turnovers in their back half and the Dogs made them pay, kicking 8.2.

If the perception was that the Dogs need Aaron Naughton to kick a score for them to be dangerous, that concept was quashed on Sunday. They had 10 individual goal kickers and it was their smalls who looked most dangerous. Luke Beveridge was most pleased with their lesser types in Lachie McNeil (three goals) and Robbie McComb (two), but he cautioned they had to back-up the win next week against Port Adelaide to get some momentum into their season.
– Damien Ractliffe

The number one contender to Melbourne’s premiership crown has revealed themselves. It’s the Lions, who were way too good for an off-colour Sydney Swans as they put together their best game of the year, and now deservedly sit in second spot on the ladder. They looked a team with every piece of the jigsaw puzzle in place as the took the Swans apart – their first win at the SCG in 13 years and their first 6-1 start since 2002. It was the usual suspects like Lachie Neale and Dayne Zorko doing the damage in the midfield, and coach Chris Fagan will be pleased with his spread of goalkickers, with Charlie Cameron, Cam Rayner and Dan McStay all contributing three majors – although he won’t be happy at seeing Joe Daniher taken off, albeit as a ‘precaution’, in the second quarter with a shoulder problem. There was also a late injury scare for Jaxon Prior. For Sydney, it would have been far uglier were it not for Lance Franklin’s move into sicko mode in a thrilling third term, which got them back to within three points. That should make the contract re-negotiations a bit easier, although John Longmire has bigger, broader concerns after the way his side’s colours were lowered. Defender Harry Cunningham also came off with a groin problem late in the clash.
– Vince Rugari

Stemming from the eventful clash between Carlton and North Melbourne, Nick Larkey and Carlton pair Lewis Young and Liam Stocker were all handed one-match bans.
Larkey’s incident was the most eye-catching as he was ruled to have engaged in rough conduct when he appared to ‘tunnel’ Young, who was charged was forceful front-on contact for his bump on Cameron Zurhaar.
Stocker was charged with engaging in rough conduct in a head clash with Tarryn Thomas.