Our reporters give you the lowdown on all the action from round nine of the AFL season.

The Pies exceeded expectations in the first eight rounds, but their salary cap woes combined with a long injury list, are starting to bite. Their list lacks class and the depth to cover so many injuries. Brodie Grundy, Jordan De Goey and Darcy Moore are their best and probably highest-paid players but are either injured or out of form. Moore’s strength is his counterpunch but with an added focus on attack in their game plan he is struggling to find the balance between shutting down his opponent and being the springboard from defence. Even at his best, he gives forwards a decent look. For the first time this season, the Bulldogs turned in a complete performance, albeit against a bottom-10 side. Because their midfield was dominant, their forward line looked more dangerous and the pressure was eased on their defence. Seldom have their midfielders all been on song. Adam Treloar, so important to their fast start last year, provides a point of difference with his speed to break the lines and kick goals. Josh Dunkley is a match-up headache with his prowess overhead. Tom Liberatore is working back to full fitness, and it’s showing in his defensive side. Sterner opposition will come, but not in the next fortnight with games against Gold Coast and West Coast leaving them well-placed to go to 6-5. There is renewed confidence this game can spark a mid-season surge. – Andrew Wu 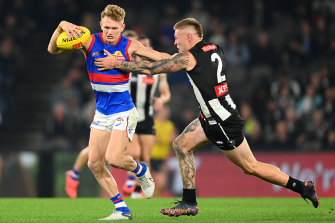 Richmond coach Damien Hardwick was in a good mood after the Tigers claimed their third win in succession on Saturday. The Tigers played the “Richmond way,” he said, tackling with a similar verve to the side that claimed three flags in four seasons between 2017 and 2020. He attributed their recent winning streak to the return of key personnel including Dustin Martin, Nick Vlastuin and Dylan Grimes, saying there was no magic formula to match having a healthy list to choose from. Richmond do have a concern, though, with Noah Balta, who injured a hamstring.
Meanwhile, Hawthorn coach Sam Mitchell can see what his club is capable of but their inability to sustain their best footy for four quarters is frustrating. The Hawks performed well for a half against Richmond, and again in the latter stages of the match, but their Achilles heel tripped them up again. The third quarter has been their weakest this year and it proved the case again on Saturday as the Tigers were able to seize control of the match. Jack Gunston is likely to be absent in what is now a must-win clash against Brisbane in Launceston next Sunday if they are to retain touch with the eight. – Courtney Walsh

There will be plenty who are ready to take Port Adelaide’s recent run of four successive victories with a pinch of salt given North Melbourne and West Coast, the AFL’s two basket cases this season, have been amongst their victims. But those other wins came against two competitive and talented teams in the Bulldogs and St Kilda. Ken Hinkley’s men do appear to be finding the rhythm and form they need to mount a finals challenge – as their demolition of North, topped and tailed by six and seven goal first and last quarters, showed. Next week’s test against Geelong will tell us much more. – Michael Lynch

This was a head spinner, not only for us but for Chris Scott. The Cats appeared in complete control when leading by 16 points at half-time, an advantage that extended to 21 by early in the third term. But they could not withstand a ferocious Saints fightback, a major concern being how they were crunched in contested ball and lacked run through the midfield when the Saints took charge. Joel Selwood and Patrick Dangerfield are greats of the game, and half-back Mitch Duncan has been a long-time star, but there is a sameness about the Cats’ midfield. Jade Gresham’s line-breaking in the third term was one of the standouts for the Saints, highlighting the weapons they have when given room. They have what it takes to be a top-four side but do they have the consistency? We all know a major issue for the Cats over the years has been the lack of a blue-chip ruckman and that was again on show when Paddy Ryder and Rowan Marshall dominated Rhys Stanley. The versatile Mark Blicavs was the better option, but the Cats cannot run him into the ground. Scott says he does not know yet whether the Cats, complete with an attacking game plan, will emerge as a premiership threat come the back end of the season. Neither do we. Yes, they have significant weapons – Jeremy Cameron was flat on Saturday, but Tom Hawkins almost willed his team home – but, at this point, it’s hard to see the Cats having the X-factor needed to claim the ultimate prize. – Jon Pierik 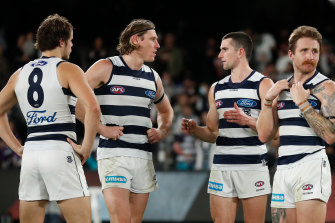 It’s hard to take much out of this match from a Sydney perspective – Essendon were that bad. The Swans basically had it all their own way, and used the opportunity to play themselves back into form. The first look at Tom Hickey and Peter Ladhams as a ruck tandem was intriguing but, as John Longmire said post-match, it didn’t have anything to do with why they won. For the Bombers … where do you start? The fact that Luke Parker openly mocked Dylan Shiel in the heat of battle for his lack of physicality should enrage Essendon players, while Callum Mills had 13 tackles – a third of the Bombers’ shameful team total of 30. Coach Ben Rutten was at a loss to explain why they weren’t up for the fight, but said much more was needed out of his side’s senior players. They could take a leaf out of Jye Caldwell’s book, after he valiantly put his body on the line in an attempt at marking against the flight and got cleaned up – fairly, mind you – by Tom McCartin, whose eyes were also only for the ball. The early diagnosis was an AC joint injury for Caldwell, with full clarity expected on Monday. – Vince Rugari

Behind a lethal, high-octane attack that cuts opposing teams up from all angles, Brisbane have emerged as the most likely challenger to Melbourne’s crown. After enduring an uncharacteristic second-quarter slumber, the Lions restored order and ran riot over Adelaide with a commanding second half. Small trio Charlie Cameron (4.1), Zac Bailey (3.0) and Dayne Zorko (2.0) took turns in hitting the scoreboard, while fellow sub six-footer Lachie Neale had a game-high 36 disposals and a goal. At the other end of the tape measure, the 204-centimetre Oscar McInerney dominated in the ruck, kicked a major and contributed to two others, while the 203cm Eric Hipwood had four score assists in a promising return from an ACL injury. The Crows had the match where they wanted it just before half-time. While their overall effort was better than in their recent losses to Greater Western Sydney and Carlton, Adelaide let themselves down with careless turnovers at the wrong times and shoddy set-shot goalkicking. Against a team of the Lions’ calibre, that level of blundering was always going to prove terminal. – Steve Barrett

“It’s interesting, when the Suns lose they cop it, and when they win, it’s the other team having a down day,” a disappointed Fremantle coach Justin Longmuir mused after the game. He wasn’t wrong. While attention has been on the Dockers’ stunning start to the year, it really was the Suns who were the story here, and Longmuir gave them all due credit. They’ve now won four games for the season – three of those wins against top-eight opponents, Carlton and the Swans their other scalps. They’ve got one of the best full-backs in the competition in Sam Collins, the clear second-best ruckman in Jarrod Witts, and a midfield that consistently wins the hard ball. If they can beat the Bulldogs at Ballarat next week, they might finally force everyone to take notice. – Andrew Stafford

Leon Cameron’s bid for a winning send-off went close but ultimately failed, as the Blues buried the Giants with five of the last six goals to maintain their spot in the top four. Sam Walsh (two goals, 31 touches) and Matthew Kennedy (one, 27) were busy through the midfield, as was George Hewett (29 disposals). Brayden Preuss had dominance at the ruck hit outs, but that didn’t worry the Blues’ on-ballers, who won the clearances and the territory battle. Without Harry McKay, Charlie Curnow was well held by Sam Taylor, but he kicked two goals early in the final term to open up a match-winning buffer. The win, however, was soured by a suspected ruptured Achilles tendon to Zac Williams, which threatens to end his season. The former Giant went to ground after his left foot gave way in innocuous circumstances, and he was subbed out at quarter-time. – Damien Ractliffe

Melbourne’s Kade Chandler faces a suspension after his desperate tackle sent West Coast’s Luke Foley into the league’s concussion protocols, and left the young Demon shattered in the reigning premiers’ thrashing of the Eagles on Sunday. Midfielder James Harmes is in doubt to face North Melbourne next week after being taken out of the game in the final term with hamstring tightness. His replacement, Chandler, faces the scrutiny of the match review officer for a chase-down tackle which resulted in Foley’s head crashing into the turf. West Coast’s Liam Ryan is also under a cloud with dual injury and match review concerns. Ryan is in hot water after electing to bump instead of tackle, and making head-high contact on Jake Bowey, who, fortunately, was able to play out the game. If the high-flying forward is not rubbed out by the MRO, he would still need to overcome a hamstring issue which saw him subbed out. – Andrew Wu