Eddie Betts says he is prouder of his anti-racism stance than anything he has achieved on the field but laments what he feels remains an unsafe working environment for Indigenous AFL players.

The Indigenous great announced on Monday night that he would retire after playing Saturday night’s game for Carlton against Greater Western Sydney, his 350th at the elite level across two stints with the Blues and six years at Adelaide. 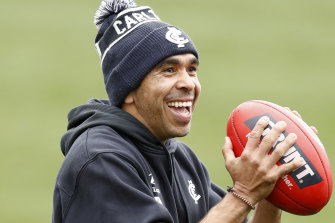 Betts has thrilled crowds across his 17-year career, kicking 638 goals, many of which have been outrageously converted.

But speaking on Tuesday, Betts said he was proudest of his five children and his activism, speaking of how he had been inspired by Adam Goodes’ struggle against racism at the end of the Sydney champion’s career.

“He gave me that voice and that strength to stand up and talk about and believe in myself and have the strength and courage to stamp out racism here in Australia, to call it out when I see it and educate people,” Betts said.

“I don’t feel like it’s safe at the moment. I honestly don’t. I feel like there’s still a lot of racism, and this year there has been a lot of racism. It’s been draining and it’s been tiring. Every year we see myself and the other Aboriginal boys standing up, trying to call it out, trying to make a stance,” Betts said.

Betts said he had known for about three weeks that he would not be offered a new contract by the Blues, and that revealing the news to his son Lewis had been tough.

“I was happy with the decision. It was a bit disappointing. I was really sad at first because I felt like I wanted to go on, because I love working with the young players, especially the young small forwards,” Betts said.

“But on the other [side] I was pretty rapt to start the next phase of my career.

“He broke down in tears, because this is his life, he grew up in this world.”

Betts also threw his support behind under-fire Blues coach David Teague, who is widely expected to lose his job after the Giants game.

“It doesn’t always fall back on the one person. We’re a footy club, we’re a team and we’re the ones out there playing. We have to be held responsible as well and accountable for our actions as well. Last week we lost by 95 points. That’s not on David, that’s on us, we’re out there playing.”

Meanwhile on Tuesday, the Blues also announced that key forward Levi Casboult would be departing the club after 12 seasons, having also not been offered a fresh contract.