Bulldogs star Bailey Smith has completed an interview with the AFL’s integrity unit over his self-confessed use of an illicit substance.

Smith spoke to the AFL’s integrity unit – which is conducting the investigation into the drug use by Smith that became public via photographs and a video that went viral on social media – on Tuesday. 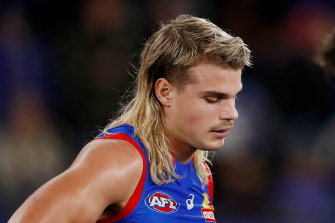 Bailey Smith has been interviewed by the AFL.Credit:AFL Photos

The expectation is that Smith will receive a two-match ban from the AFL for conduct unbecoming, which would add to the two-week ban he is already serving for a headbutt on Geelong’s Zach Tuohy.

Smith has expressed remorse and apologised for his actions, which were shown in the photos of him holding a bag of a powdered substance, which has been acknowledged as an illicit drug. The images and video were both from the post-season period when, as Smith has admitted, he succumbed to a partying lifestyle. Smith also has struggled with mental health issues in the form of anxiety and went public with those issues last year.

Smith’s case has sparked further debate about the merits of the AFL’s illicit drugs policy, which is again under review, and whether it should be changed.