Football fans have expressed frustration about ticketing issues and over-umpiring in response to figures that reveal AFL crowds are at their lowest in 26 years, excluding the past two COVID-ravaged seasons.

While it would be unrealistic to expect attendances to bounce back to record-breaking pre-pandemic levels, given COVID case numbers have remained high, crowds in 2022 are, on average, at their lowest since 1996, when fewer than 30,000 people per match attended the footy.

Crowds are at their lowest in 2019 since 1996, barring the past two COVID-affected seasons.Credit:AFL Photos, Getty Images

That is despite a strong turnout for round one, when an average of 40,000 people flocked to the first nine games of the season.

Across 90 games of football so far this season, attendances have averaged 30,517, well below the 2019 pre-pandemic average of 35,122 across the full 23-round season, which was a record-breaking year for total attendance across a home-and-away season.

The state of the game is one reason, according to Julian Farrell, the chant leader for the Sydney Swans’ cheer squad. Cheryl Critchley, president of the AFLFA, says other reasons include lingering COVID issues, the cost of going to the footy versus the convenience of watching at home, ticketing issues, and the rolling fixture.

The number of daily new COVID-19 cases in Victoria has not dropped below 7500 in the past 28 days, while WA and SA have experienced their highest COVID case numbers in 2022. Perth’s Optus Stadium operated at reduced capacity through the first seven rounds.

The AFL also froze general admission tickets for all MCG and Marvel Stadium matches and introduced a new $50 family membership in 2022.

But Sunday’s Giants and Eagles clash in Sydney drew just 5057 people, less than the 6040 who attended the Dogs and Suns contest in Ballarat a day earlier.

The AFL lauded footy fans for returning in high numbers in round one, which averaged crowds of 40,321 across the nine games. 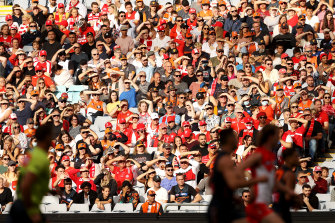 Crowd numbers have dropped since the round one.Credit:Getty Images

But the season-opening round appears an outlier. Round three, which included Melbourne’s win over Essendon, Geelong’s clash with Collingwood and the blockbuster between Carlton and Hawthorn, drew an average of 35,777 across the nine matches.

The next highest round was in round five, when 31,701 on average attended the nine games.

Geelong’s GMHBA Stadium is, however, operating at a reduced capacity due to redevelopment.

But Farrell said the brand of footy and umpiring can’t be underestimated for the crowd figures.

“The flowing end-to-end spectacles you used to get are gone,” Farrell said.

“Now we not only have 15-20 players around each ball-up, and umpires are hyper-eager to pick out soft free kicks to try to open the game up.

“This 50-metre penalty thing is the straw that broke the camel’s back. There isn’t a shortage of umpires in junior and community footy because of excess abuse, it is because there hasn’t been footy in town for three years. People have moved onto other things.”

Farrell said there were other Swans members who struggled with the digital ticketing system.

“I’m very au fait with the internet, mobile phones and apps,” he said.

“I’m slowly getting used to digital ticketing. But how are older people supposed to know how to download their tickets each week? They are being told, ‘don’t come any more. Footy isn’t for you’.”

Other members have lost their regular reserved seat, according to Critchley.

“I am going to miss travelling to Perth (in round 16) for the game because I can’t get the Monday off from work,” Palmer said.

“With a proper fixture, I put in as soon as they come out for days off as needed. Really, I’m peed off after COVID slammed us and not being able to go to games I miss now because of this rolling crap.”

Critchley said COVID-19 was still a factor for people who had to isolate and for others who “may have a lingering apprehension about being in crowds”.

But she said scheduling – such as Thursday night games – public transport issues and the cost of going to the footy were among other factors which deterred people from going to games.

Melbourne and the Western Bulldogs are the only clubs averaging higher home-and-away attendances in 2022 compared with 2019, according to AFL Tables, although that figure factors in the 58,002 who attended the season-opener between the two sides.

The past two Friday night games at Marvel Stadium – the Western Bulldogs’ win over Collingwood and Carlton’s win over Sydney – were also sold out with only standing room tickets available.

There were no games held at Homebush or in Cairns in 2019, both of which have hosted matches in 2022.